We Expect A Record Business Year

Krušik expects 2017 to be a record year in the company’s 78-year history, both in terms of revenue generated and in terms of the physical volume of production. Alongside commissioning the new blasting cap facility, new investments are also planned in the expansion and modernisation of capacities, as well as creating new jobs

A long-term presence on the world market, coupled with the quality of delivered products, classifies Krušik AD among the world’s most renowned weapons manufacturers, while the company is also recording a trend of growing interest in its products. With a new approach to organising its operations since 2013, the company records remarkable results, with constant growth in the volume of business, investment in new production units and an increasing number of partners, says “Krušik” a.d. CEO Mladen Petković.

Also testifying to Krušik’s strong recovery is the constant increase in the number of its employees and the regular payments of obligations towards the state, which make this company the most desirable employer in the Kolubara District. Plans regarding the modernisation of technology are accompanied by Krušik’s efforts to secure an appropriate young and skilled workforce, meaning that the company is always open to hiring electrical and mechanical engineers, while the Technical School in Valjevo is educating new generations of students for the occupations of milling machine operator and lathe turner, which the company needs. With this, the company strives to also demonstrate its commitment in the area of staffing to quality production, for which there is ever-increasing interest among customers from around the world.

How satisfied are you with the results achieved by the company in 2016?

Average annual growth in income over the last three years totalled 68 per cent. Krušik regularly settles its obligations towards the state, public enterprises and utility companies, suppliers and others. We have restored the trust of our business partners and the company’s former reputation, achieving liquidity and ensuring the company is able to generate the funds needed for regular operations and the servicing of assumed obligations without the need for external sources of funding.

Krušik’s products are present in over 70 countries worldwide and are synonymous with quality and reliability. In 2016, 90 per cent of production was exported and we currently have signed contracts worth 240 million dollars

How much have exports contributed to these kinds of business results?

– Our company is export-orientated. Krušik currently has signed export contracts worth US$240 million. Of total turnover in 2016, over 90 per cent related to exports, while that turnover was 28 per cent higher than planned. Krušik’s products are present in over 70 countries worldwide and are synonymous with quality and reliability.

The company’s presence on the world market and it’s striving to increase that presence create the need to permanently improve production processes, increase the productivity of labour and improve all performances that lead to growth in the competitiveness of our products.

Who are your most important export partners?

A long-term presence on the world market, coupled with the quality of delivered products, classifies “Krušik” AD among the world’s most renowned weapons manufacturers. The company has also been recording a trend of growing interest in its products over the last few years. 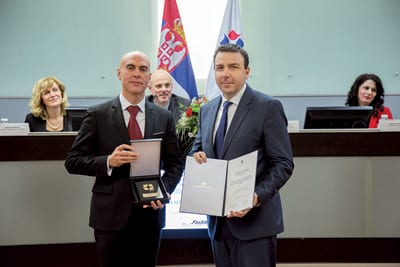 A large number of foreign delegations, with representatives of interested parties – ministries of defence, armies, police forces and other institutions, accompanied by companies registered in the trade of arms and military equipment, have visited our factory and been able to verify for themselves that Krušik is a high-quality partner to cooperate with, especially when it comes to the quality of products and the contemporaneous nature of solutions for certain resources.

Has the company’s positive performance resulted in the creation of new jobs?

– The modernisation of products, expansion of the product range with the inclusion of new products, growth in the volume of production and endeavours to settle contractual obligations on time have all led to the creation of new jobs. During 2014, 2015 and 2016, some 1,198 new jobs were created at Krušik, while in 2016 alone there were 725 new jobs. Krušik currently has 2,358 employees.

As of 1st January 2014, earnings have been paid with the associated tax and social security contributions, which was not the case from 2010. Earnings are paid regularly, without a single day of delay. Likewise, I can state with great satisfaction that Krušik is today the most desirable employer in the entire Kolubara District.

In 2017 we will work on improving the personnel structure at Krušik through the recruitment of young engineers and tradesmen. Our cooperation with the Technical School in Valjevo, whose students we provide with scholarships, should also contribute to that

What are your most important plans for 2017?

– We expect 2017 to be a record year in Krušik’s 78-year history, both in terms of revenue generated and in terms of the physical volume of production. We plan to create new jobs. In the first half of the year, we plan to commission the new blasting cap facility, the cornerstone of which was laid in 2016. Likewise, we will launch the implementation of several new investments, as well as continuing to expand and modernise capacities. We will place special emphasis on the development of new technology and the modernisation of existing technology.

Moreover, in 2017 we will also work on improving Krušik’s personnel structure. Here I am primarily referring to the age structure of engineering and trade staff.

During the last 20 years, the Technical School in Valjevo has not taught the educational profiles of the milling machine operator, lathe turner etc., due to which there is now a deficit of people qualified for these occupations. In order to overcome this problem, Krušik has signed an Agreement on business-technical cooperation with the Technical School in Valjevo, with which we have defined the method of teaching practical courses for students with the educational profile of machine processing operator, coverage of their scholarships and the establishment of employment relations at HK “Krušik” A.D. Valjevo following graduation.

Practical work is carried out on the premises and in the facilities of HK “Krušik” A.D., Valjevo for the duration of the envisaged teaching plan and programme for that educational profile, with the participation of teachers from the Technical School and experts from Krušik as demonstrators and assistant practitioners.

We are constantly open to hiring young electrical and mechanical engineers.

In your opinion, how should the business environment be improved to ensure the continued growth of revenue in domestic production?

– The business environment in Serbia is good. Securing continuous revenue growth is a task for the management of companies. I am of the opinion that a condition for the survival of enterprises today is the daily monitoring of the market and the continuous adaptation of products and ways of functioning in accordance with the needs of the market. That implies monitoring new technologies, modernising existing products and developing new ones.

Valjevo is a city and the administrative centre of the Kolubara District in western Serbia. The city covers 905 km² with a population of...
Read more

In the last five years Krušik has been achieving ever better business results and this year will be no exception to that. Best illustrating...
Read more