Initiator of Technical and Technological Development of Western Serbia

HK Krušik a.d. Valjevo has recently received the prestigious Captain Miša Anastasijević Award for sustainable development and competitiveness, mainly due to the high value of signed contracts that provided employment for 565 new workers and a positive result in 2015, and that will surely guarantee (lucrative business opportunities) for the next two years.

In a relatively short period of time and thanks to the great efforts of the management and all employees, HK Krušik has grown out of a company that was on the brink of oblivion into a stable organisation with clear and realistic development plans that the Company is able to implement using its own resources.

When you took over the leadership of Krušik two years ago, the Company was in huge debt. What is the financial stability of the Company at present?

– When I took on the role of CEO on January 2014, I found a bad financial situation at the factory. Namely, in 2013 alone, the Company generated a loss close to a billion dinars, while financial obligations towards the state, suppliers and banks amounted to over 40 million euros. We faced unconnected employment status for all employees for a period of four years, delays in the payment of salaries, while in a Company where the main activity is the production, 60 per cent of the total number of employees have been working in administration.

After a number of ”unpopular” measures and decisions having been taken by the management in the past two years, HK Krušik a.d. Valjevo has currently been classified as a successful and stable company, a leader in the field of the defence industry and the initiator of technical and technological development of industry in Western Serbia.

We have ended last year with a positive result in the amount of 201 million dinars and contracted projects worth approximately 140 million US dollars, which secures the capacity employment for 2016 and 2017. We also signed a contract for the transfer of technology in 2015, worth 30 million euros.

In comparison to the results of 2013, we have achieved implementation growth of almost 130 per cent.

The trust of our business partners and our former reputation have been restored, while we achieved liquidity and the Company’s ability to generate the money required for normal operations and accomplishment of commitments, without expensive external sources of financing.

The number of employees has increased by 565 from the beginning of 2014, while there are plans to employ additional 155 workers. The factory currently employs 1,732 workers, only seven per cent of whom work in administration

You recently announced a new investment of around 20 million euros. How is the realisation of this investment progressing?

In early 2016, the works on the construction of a new plant for rocket motor chambers production have been completed covering the area of 2,800m2. The plant was built on the site of the former Tool factory, which was destroyed in NATO bombing in 1999.

The new building is equipped with the flow forming machines, being the “core” of this technology. The entire investment is financed from our own resources and the value of the first phase is estimated at 9.4 million euros. The construction of this facility will create conditions for renewal and modernization of the production resources for Krušik missile program, as well as the creation of brand new products in this domain. This is the only factory of its kind in the region. 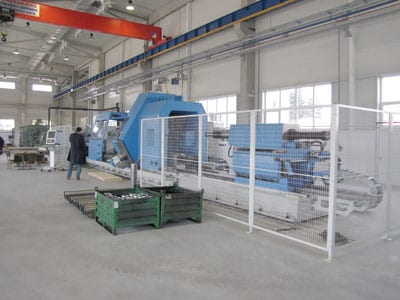 In cooperation with the Public Enterprise Jugoimport SDPR, we launched the implementation of an investment project to build a new primers plant or to expand the capacity of the factory for initial devices and detonators. The entire quantity of produced primers will be delivered to companies belonging to the OIS (Defence Industry of Serbia) group, thereby replacing the import of these products. The value of this investment in the first phase amounts to 10 million euros.

Completion of these plants with all the envisaged equipment will enable employment of 190 new workers. The number of employees is conditioned by the choice of modern technology and highly productive and automated equipment.

Late last year you announced some projects, for which you expected to sign the contracts worth about 140 million US dollars, with over 90 per cent due to be exported. What is the status of these projects?

– We have started the 2016 with signed contracts worth approximately 140 million US dollars, which secured the employment of capacity for 2016 and 2017. The Company also signed a contract for the transfer of technology in 2015, worth 30 million euros.

The implementation of the contracted projects is progressing according to the plan and in line with the agreed schedule. Continuity has been achieved in terms of the financing of the Company and compliance with inflows and outflows, thus possible production delays and bottlenecks have been reduced to a minimum.

In the first quarter of this year, you hired 146 new workers, while you expect about 200 new workplaces to be created by the end of the first half of the year. In which parts of the Company have you found room for such mass employment?

– The number of employees has increased by 565 from the beginning of 2014, while there are plans to employ an additional 155 workers. The factory currently employs 1,732 workers, only seven per cent of whom work in administration.

Increasing the number of employees is a consequence of the increased workload, due to the high value of signed contracts and their implementation within the agreed deadlines.

In addition to regular wages and paid taxes and contributions, our employees also have all of their rights secured and protected, the quality few companies can boast. Our employees feel like they have a name and a surname, and are not just a number in personnel records

Are you satisfied with the skills and quality of work shown by new employees, who mainly come from the Valjevo Technical School, and what kind of cooperation do you have with this educational institution?

– In the last 20 years, the Technical School in Valjevo has not included the educational profiles of metal-milling machinist, lathe-turner, and the like, due to which these occupational profiles became scarce, while metal industry companies, including Krušik, found themselves in an unenviable situation. Namely, on the one hand, we have expert staff members who are about to retire, while on the other hand, there is a lack of young people who could be trained and introduced to this job, while it is undeniable that good expert staff form the backbone of good, high-quality production in our conditions.

In March this year, we signed a Contract on business and technical cooperation with the Technical School in Valjevo, which defines the method of introducing practical classes for students with the educational profile of machine processing operator, scholarships for them and their employment at HK Krušik a.d. Valjevo upon graduation. Practical classes will be given on the premises and in the facilities of HK Krušik a.d. Valjevo, starting from the second grade in the duration provided by the curriculum for that educational profile, with the participation of teachers of the Technical School and experts from Krušik as demonstrators and associate practitioners.

During the realization of this agreement, Krušik will provide scholarships for all students of this educational profile who achieve the minimum overall success of 3.5 (of 5.0), appropriate behaviour and an assessment of 5.0 for practical classes, as well as two students from families in the worst financial situation, provided they have appropriate behaviour.

As the ultimate result and goal of this contract, an obligation is set for HK Krušik a.d. Valjevo to provide jobs upon graduation for all students who met the aforementioned criteria and in accordance with their qualifications.

When one thinks of Valjevo, one necessarily thinks of Krušik. How much does the economy of Valjevo depend on Krušik’s successful business activities?

– Krušik represents the industrial heart of Valjevo. Given that our products are mainly intended for export, in addition to the impact it exerts on the economic life of Valjevo, Krušik also provides a specific contribution to the country’s overall foreign trade balance.

In addition to regular wages and paid taxes and contributions, our employees also have all of their rights secured and protected, the quality few companies can boast. Our employees feel like they have a name and a surname, and are not just a number in personnel records.

In the procurement of raw materials priority is given to local, Valjevo-based companies, so we can say that Krušik also promotes the economy of Valjevo in that way. All financial obligations to local government and utility companies are paid regularly.

After a long period, HK Krušik a.d. Valjevo is again in a position to undertake specific activities that contribute to the improvement of the wellbeing of the entire community. In accordance with this orientation, in 2015 we took a number of decisions to realize donations, amongst which was a donation for the hospital in Valjevo, amounting to 4.5 million dinars.

Valjevo is a city and the administrative centre of the Kolubara District in western Serbia. The city covers 905 km² with a population of...
Read more

In the last five years Krušik has been achieving ever better business results and this year will be no exception to that. Best illustrating...
Read more