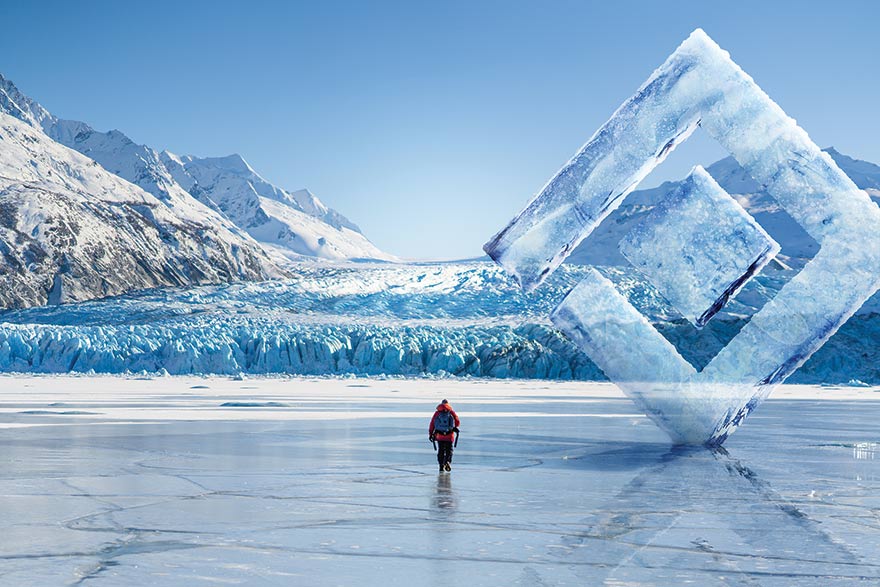 The smooth ice was like a clear window into the black abyss of the deep Siberian lake. Sergey Zimov, a Russian scientist studying Ice Age methane trapped in the Earth, turned back to the young American graduate student once again, motioning her forward. “I want to show you something important, Katya,” he said. Fuelled by a rush of adrenaline, Katey Walter Anthony continued to shuffle slowly across the frozen surface until Sergey stopped. “Looking down through the ice was like looking up at the night sky – but instead of stars, clusters of bubbles streamed up,” she recalls. It was a moment that would change everything for this Arctic researcher

Raised near California’s Sierra Nevada mountains, Katey was drawn to the quiet serenity of remote lakes. Friends were hardly surprised when, as a Ph.D. student, she leapt at the opportunity to study in Siberia. She had suspected that ancient methane was randomly leaking from beneath Arctic lakes, but what Zimov showed her changed her understanding of how melting permafrost is influencing global climate change. It turns out that this was not random at all. Permafrost, a thick frozen layer of ground found primarily in polar regions, contains twice as much carbon as the atmosphere. As ice melts from global warming, Arctic lakes form and become natural digesters that turn soil microbes into methane – a much more potent greenhouse gas than carbon dioxide.

Understanding the implications of thawing permafrost and the impact of melting Arctic lakes leaking methane has become critical to understanding climate change. The Arctic is warming twice as fast as the rest of the planet and Katey’s research has helped to reveal that Arctic lakes are emitting five times as much methane as previously thought. Emissions from these lakes, also known as thermokarst lakes, are expected to peak by 2050, and it takes just one year for these powerful greenhouse gases to mix into our global atmosphere. As Katey explains, “we estimate that up to 10% of the projected global warming this century could come from thawing permafrost, and that affects the entire Earth. What happens in the Arctic does not stay in the Arctic.”

The scope and perils of our global climate crisis are well documented. In 2020 alone, wildfires ravaged the Brazilian Amazon and the country of Australia, while the most active Atlantic hurricane season in history was documented, disastrous flooding surged in China and global temperatures soared as levels of Arctic sea ice shrank to alarming lows. Burning fossil fuels for energy may have started during the Industrial Revolution, but over half of all human-caused carbon emissions have been produced since 1988.

The question is no longer whether the Arctic is melting, but rather how fast. NASA has reported that while many models predict the Arctic Ocean will become ice-free for at least part of the year before 2100, other models predict that it will happen much quicker – within the next 50 years. Either way, the consequences would be devastating for natural ecosystems; most polar bears, for example, could become extinct in the wild by the end of this century. While the Earth has always experienced natural cycles of warming and cooling, in evolutionary terms, Katey explains that “a four-degree increase in temperature would occur over 8,000 years; now that same temperature rise is happening in less than 100 years, as a result of fossil fuel induced carbon emissions.” She goes on to recall, “places where I used to crosscountry ski a decade ago are now swamps and sinkholes. The Arctic is literally melting before our eyes.”

Although Katey understands that this may paint a grim picture of the future, she is quick to note that people need to spend more time connecting with nature, rather than living in fear. “By going outside, the impact on our health and our relationship with the natural environment will improve. Regaining this connection with nature is one of the most important things we can do.

When our hearts are in it, that will guide our future decisions to do the right thing.” But are there decisions that we can make right now to help? Katey emphasises that we can reduce our impact on carbon emissions by saving energy at home and at work. “When we invest in energy-saving technology, we save money in the long run, while at the same time reducing carbon emissions. It’s a winning combination,” she insists.

Sustainable development is a decision that is important for the largest corporations, but also for global society as a whole. It is part of the business policy of all companies that want to rely on a healthy business in the future. For example, Katey prints copies of maps and data from her research and notes that there are also positive examples that prove change is possible. Although seemingly negligible at first glance, printers are often one of the largest producers of heat during operation and wastage, through large amounts of consumables in the form of toners and cartridges. Some companies, such as Epson, have introduced printers that use technology without heating during operation and when turning on the device.

The problems of traditional thermal printing are additional delays, interruptions, waste and high consumption of energy, money and time. With Epson’s new printers that come with heat free technology, consumption is kept to a minimum. Laser and inkjet printers may look the same on the outside, but it’s what’s on the inside that counts. Epson’s Heat-Free Technology does not require heat in the ink ejection process. Instead, pressure is applied to the Piezo element, which flexes backwards and forwards to fire the ink from the printhead. Less energy use means less fossil fuels consumed, which means less carbon emissions going into the atmosphere. “Our choices really do matter in work and in life. And when businesses and people make smart decisions about what technology we use, that will also make a positive difference for our environment.”

Epson’s heat-free technology uses up to 83% less energy. Reducing heat is one of the best ways to eliminate the impact on the environment. By choosing technology without heating for reduced energy consumption, the global warming effect of the glass bell will be reduced, which aims to slow the melting of ice in the Arctic and improve the environment as a whole.

As many businesses around the world are investing in transformation towards a greener and more sustainable future, some companies aren’t only changing their practises...
Read more

Just as people in the Soviet Union used to whisper jokes about Brezhnev and the Kremlin’s gerontocracy, a similar kind of covert, political, bar...
Read more

The Western Balkan region needs to become part of the solution to both challenges – the pandemic and climate change. To achieve this objective,...
Read more

In Which Direction Is The Serbian Labour Market Changing?

Major changes have hit the Serbian labour market, which can be seen in the shortage of personnel for both complex and simple jobs. Although...
Read more

We Must Decide What Kind Of Migration We Want

Automation will increasingly be on the rise, not only as part of progress and advancement, but rather as a result of the need to...
Read more

Saint-Gobain is a world leader in modern and sustainable construction that designs, produces and distributes materials and services for the construction sector and industrial...
Read more