Gecić Law was the youngest law firm in Serbia to receive a Tier 1 competition ranking, from the coveted London-based “Top Tier” Legal 500 directory. Since then, this unique boutique law firm has gone on to prove its cutting edge expertise in some of the most complex domestic cases to appear before the European Commission

What were the main challenges of building a law firm in Serbia and innovating in a profession viewed by many as traditional?

– We kicked off as a “start-up”, which is a term I use loosely, as the legal profession differs from a business in many aspects, with setting the vision and attracting the right people representing the toughest challenge.

This entrepreneurial culture, with meritocracy, innovation and professional credibility at its core, is something we have nourished to date, despite our continued upward growth spiral.

We take pride in the fact that our team members come from leading U.S. and European universities, including Florence EUI, UC Berkeley, KU Leuven, Maastricht, Nottingham, Carnegie Mellon, Panthéon-Assas and Harvard. With such a profile of people, innovation comes naturally.

What are the major legal challenges ahead during the course of Serbia’s EU accession process, when it comes to the business sector generally?

– Similar to the Brexit ‘Great Repeal Bill’, but in reverse; the accession process presents a major shock for every business, because of the unique nature of each country’s individual approach. Our firm has been at the forefront of meeting these challenges, as a trusted go-to partner to businesses and, together with international experts like GIZ, the EBRD etc., to the Government of Serbia.

While the end-goal of each EU candidate country is to align with the EU Acquis, each negotiation process has its own peculiarities, exceptions etc. Our EU expertise and regulatory/legislative focus ensure that we understand why some economies thrived during/upon EU accession, whereas others failed, and how Serbia as a country, and all of its stakeholders, can benefit from that knowledge.

In this way we create fundamental added value in the negotiating phase, protecting many aspects of the country’s growth prospects, both in the interim period and once it becomes an EU member state.

We are the first commercial law firm in the Western Balkans to introduce a separate European Law, Trade & Enlargement practice, and State Aid expertise

In practice, we assisted the Chamber of Commerce & Industry of Serbia and the Ministry of the Economy in drafting the New Investment Act and provided support with regard to the review of the draft amendments to the Act on Agricultural Land, and Consolidation of Agricultural Land, along with GIZ.

We also assisted in the latest alignment of the Public Procurement Act with the EU Acquis and the 2014 Directives and provided guidance in drafting an authoritative interpretation of the Privatisation Act, which was eventually adopted by the National Assembly. Most recently, our firm teamed up with the EBRD, as legal counsel to the Ministry of Finance, on the project aimed to improve the legal framework for factoring.

You also advised Železara Smederevo (Steelworks) and the Government of Serbia in the first-ever parallel state aid case in the steel sector before the authorities in both Brussels and Serbia, under the EU SAA. You are also acting on their behalf in the ongoing EU antidumping case before the European Commission (EC). What were the major challenges of these cases and how do you resolve them successfully?

– In order to truly understand the challenge, it’s good to remember that, according to the EBRD, the impact of the Železara Smederevo transaction on Serbia’s GDP in 2017 alone is somewhere around 1.0-1.5%. Needless to say that professional and reputational stakes were extremely high. 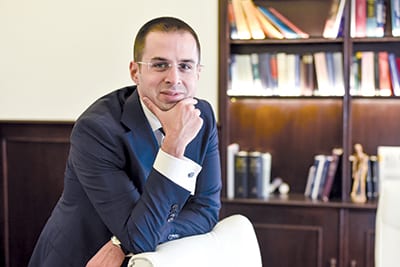 From a purely legal perspective, finding a feasible solution required us to accurately understand and analyse almost 60 years of EU case law in order to perceive every possible scenario and legal remedy available to the steel mill and the Government, as its largest shareholder. Knowledge management capabilities were of paramount importance, which required an incredible investment on the part of the firm.

We have created what is probably the most comprehensive private EU law library east of Vienna and Brussels-based online resources, which gave the team the kinds of tools and insights necessary to quickly and effectively grasp the bigger picture and formulate the best strategy moving forward.

We are currently the lead counsel in two distinct procedures and are awaiting a major decision on the part of the Commission that we hope will be in Serbia’s best interest, and a testament to the team’s prowess in an area of practice that was virtually nonexistent locally until a few years ago.

You also supported Etihad and Air Serbia in an investigation in Brussels that ended with the Commission giving a green light to the transaction. What does this precedent mean for similar cases in the future?

– While the steel mill sector challenged our ability to understand the full scope of EU case law, Air Serbia’s investigation was more of a contemporary challenge, given the relatively new Single European Sky initiative and EU rules on ownership and effective control of airlines.

In addition to testing our ability to do ground-breaking work for the client, it also pushed our ability to support the system at large, given that there were no agencies or individuals with prior experience in case matter. This was achieved with the support of DLA Piper London.

The investigation was concluded in July 2016, with the EC finding that the UAE carrier’s investment in Air Serbia is in line with effective control rules. This showed the investor community that the Serbian Government, companies and law firms have the capacity to take on largescale M&A projects at the highest level.

In May you hosted the 2017 Reunion of the Harvard Law School Association of Europe in Belgrade. What does this event mean for Belgrade and the profession, and how can young people from Serbia take advantage of possibilities to attend Harvard University?

– With more than 160 HLS alumni who came to Belgrade, it is likely the largest international gathering of legal professionals in the Western Balkans. This was an amazing opportunity to showcase our city, network and help tear down certain outdated biases, creating more opportunities for business and tourism in Serbia.

The event’s academic finale, a session held at the National Assembly, included professor Emily Broad Leib (named by Time Magazine as one of the five most innovative women in food), Stefano Palmieri, CFO of Granarolo Group, and Serbian Agriculture Minister Branislav Nedimović. It was also the first time the HLSA Europe Award was awarded to a prominent Dutch HLS alumnus, William Stevens, co-founder of HLSAE.

Some of our less modest HLS alumni can still be caught bragging that the Reunion heralded the appointment of Ana Brnabić, the keynote speaker at the Gala Dinner, as the Prime Minister. We can’t be more thankful for the support and positive feedback we received from the local community, particularly the National Assembly, the Royal Family, who kindly hosted the Gala Dinner at the White Palace, the local Harvard Club, the local academic community and the Government of Serbia.

As I’ve noted many times before, as a Harvard Law graduate, I’m proud that we highlighted the opportunities Harvard offers young people from Serbia. I hope this encourages our young students to apply to Harvard Law and continue to grow and challenge themselves.

Tell us more about the scholarships and opportunities the firm creates for young professionals.

– We strongly believe in leading by example and giving back – in 2016, Gecić Law established the Taboroši Scholarship, in memory of Professor Svetislav Taboroši, whose work on academic research and innovative problem solving led to his pioneering work in the field of law & economics in Serbia and the region.

According to Belgrade Law School Dean, Sima Avramović, this was ‘the first time in recorded history since the 19th century that a firm and former students have established a scholarship fund on behalf of their professor’ in Serbia. Our commitment to fostering home-grown talent is also illustrated by our involvement in the establishment of Harvard Club of Serbia Scholarships during my tenure as Vice President and scholarship project manager.

Konica Minolta has been successfully operating in the Adriatic region for years, and its innovative solutions and business areas attract a large number of...
Read more