“My company sees Serbia as a place where a lot of things could be done; Serbia and Belgrade are ‘virgin territory’ for us,” says Adir El Al, Chief Executive Officer of Airport City Belgrade

Adir El Al is the CEO of Airport City Belgrade, which represents one of the biggest investments in Serbia, as a business park where more than 110 of the largest companies in the country reside and operate. And although it could be expected that, as the head of ACB and one of the key managers of AFI Europe in Serbia, he would locate his cabinet at the top of one of the most modern buildings inside this ‘city within the city’, CorD ‘found’ this student of Israel and London, who has amassed vast working experience from Africa to Europe, in a modest office located on the periphery of ACB, in a renovated hangar for World War I planes.

“I feel comfortable here, completely aware of the historical significance of this building, a dome built according to the design of Milutin Milanković, and I find some symbolism in all of this,” says Adir El Al at the start of our conversation.

The facts about Airport City are well known, but who came up with the ‘City within the City’ concept?

– When we came here in 2003, we already had a similar business park in Israel, interestingly with the same name of Airport City. One of our shareholders came together with us to Serbia and we were trying to implement the same concept from Israel here in Serbia, considering that it had proven to be a very successful concept.

I have huge respect for our competitors, though I still think Airport City is unique, because we give additional value to our tenants

Airport City is a business park, representing a combination of several office buildings gathered together in one complex, which is able to provide all necessities required by users, to cater for all their needs, and that was how we came up with the concept and slogan ‘City within the City’. That’s because we provide whatever you need as an office user on a daily basis, whatever you need to consume.

Who do you consider as your main competitor in Serbia, given that the business park concept is a rarity in the country?

– There is no similar project. We are the only business park with such a concept, but of course, competition exists. There are other companies in Serbia, both local and foreign, that construct office buildings and complexes – though not business parks – and they are very present and competitive. I have never underestimated my competition, and I do believe the others are significant players in the office and residential market segment.

Airport City Belgrade isn’t finished yet. Can you envisage the final completion of the entire project?

– We have so far utilised about 50 per cent of the park. We still have vacant land under development and I expect this whole area to be finished in the next five to six years. When it comes to its future, we are planning to build two towers with 20 and more floors, and I’m hoping these towers will blend into the existing silhouette of ACB, which is already a symbol of the municipality of New Belgrade.

Skyline is the other, latest challenge for you, with initial works, have commenced at the site in Kneza Miloša Street a year and a half ago?

– We took over the site in Kneza Miloša Street and managed to carry out a very thorough urban planning process. 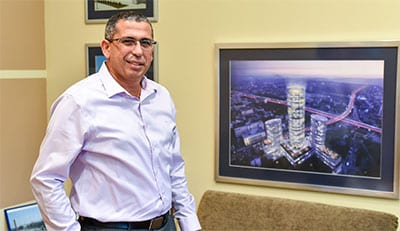 Three towers, one of which will have 35 floors, comprising two residential towers and one office tower, as well as a lot of accompanying commercial buildings, will compose this mixed-use complex. Everything will be connected not only with Kneza Miloša Street but also with the Three Keys Park next to Gazela Bridge, which is being renovated by AFI. We have decided to make the renovation of this park our donation to Belgrade.

Given that Serbia is a relatively poor country, how can projects like this be profitable?

– We segmented it into phases. Each phase was planned to be sufficient for our capacities, and the capacities of the market itself. And the proof is that in our other projects we managed to sell apartments almost completely in advance. I think that part of our success is based on the fact that we are very conservative, in terms of planning and the ways we spend money, which is why we have never been ‘stocked in the corner’.

You are a very successful businessman and one of the top managers at AFI. Did you choose Serbia as your next destination 13 years ago, or did that decision not depend on you?

– When we decided to come to Serbia, we explored possibilities and the global market, attempting to find out where we can make better levels of gains in terms of generating profit, but also in terms of further development. We received warm hospitality from the Serbs and Serbian institutions. We were aware that our company could contribute a lot to the Serbian economy, while the most important fact is that more than 90 per cent of our investments stays in the country. I personally find Serbia very attractive for doing business.

As a real estate businessman, why do you consider Serbia a good place to do business?

– A lot of my friends in Israel posed the same question to me. In a country where there is a lot of demand for residential and office buildings, where you can build relatively quickly, in a year and a half we can build huge capacities of buildings, in a country where the legislation is complicated yet still – for those of us who have been in the country for many years – manageable. We understand the system and cooperate with it, and there is a mutual understanding in terms of the importance of Airport City Belgrade as a mega project in every sense. It is important both for the economy and for the people.

Do you see your career as an obstacle or an advantage for your children, considering that they are growing up in a foreign country that also doesn’t happen to be the best place on Earth?

– This is not an easy question to answer. I have been talking with my wife a lot about this issue. Let’s say that my three sons are very deeply involved in the Serbian community. They speak Serbian excellently, while on the other hand they attend an international school and have met a lot of other kids there who are in the same situation of growing up in a foreign country.

I have to underline that AFI Europe strives to plan in advance, to maintain itself in one place, for good reason, as long as necessary, and I do believe in such a ‘philosophy’, because I am a ‘long distance runner’

I know that my sons enjoy both worlds that they have at their disposal here. When we are at home we are an Israeli family, but outside our home, we all feel like Serbians, with a lot of Serbian friends who ‘adopted’ us. Living with so many differences, my wife and I believe strongly that our children are becoming better people. My family is part of this community, and even I can understand a bit of Serbian, while my wife and I are very fond of your culture and, of course, your kafanas.

Is Serbia just a phase in your career and your life, or something else?

– Serbia is not the first foreign country where I’ve worked, but in terms of the foreign counties that have featured in my professional career, I have spent the longest period in Serbia. And I consider that to be a positive fact in my life.

I really like Serbia and wouldn’t have stayed so long if I didn’t like the country. However, to answer your question, it would be irresponsible to choose a side in this matter and say whether this is a permanent posting or just a phase. One can never predict everything the future will bring.

There is the saying in Israel that “Haifa works, Jerusalem prays and Tel Aviv plays”. What about Belgrade; does it work, pray or play?

– Belgrade does it all together. Although it reminds me of Tel Aviv the most, and a lot of my acquaintances perceive it as a place for fun. From my point of view, it is not like that; I see Belgrade as a place that channels work, pray and play.

With the construction of the last, 31st floor, Belgrade’s Skyline AFI Tower has reached its full height. Works are now underway on the stage...
Read more

Outdoor business gatherings are slowly, but cautiously, returning to our lives, accompanied by an obvious desire for the former normality to return to our...
Read more

In the first panel on 6th Serbian Property & Infrastructure Development Conference participants shared their experiences as investors and talked about the future of...
Read more