From Failure to Multi-Millionaire

Robin Hutson’s life would probably have been far less successful if he hadn’t failed his school exams. Responsible for bringing power showers and fresh coffee to UK hotel rooms, Robin Hutson and his wife Judy have helped revolutionise the British hotel experience. Now they run an acclaimed group of hotels together called The Pig

I managed to screw up all my O-levels [former UK school-leaver exams for 16-year-olds] and wasn’t invited to sixth-form college,” recalls the 62-year-old. “So I had to find something else to do. My parents thought it would be a good idea to get me out of London, so – aged 14 – I went to grammar school in Surrey. It was a mixed-gender school, and I was like a kid in a sweet shop — there were far too many distractions. I ended up getting three O-levels and the school said my presence wasn’t required for the sixth form. At the age of 16 I wasn’t interested in doing much apart from chasing girls, and my mother said ‘well, you always liked messing around in the kitchen’.”

She advised her son to enrol in a course in hotel and catering operations, which whetted his appetite for a career in the hospitality industry.

After graduating from catering college in Surrey in the mid-1970s, Robin joined the management training programme of the then Savoy Group of hotels. 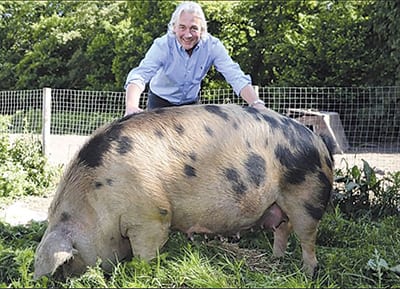 This saw him start as a junior waiter at London’s five-star Claridge’s hotel, before moving across to the equally prestigious Hotel de Crillon in Paris. He then returned to London. After studying hotel and catering operations, He became reception manager at the Berkeley, in London’s Knightsbridge area, at the age of 22. The uniform was tails and stiff collars: “I thought I was the dog’s bollocks [best of the best], to be honest. I had Dustin Hoffman on speed dial, Peter Ustinov ringing up and Diana Ross at the desk.

It was around that time that he met Judy.

I remember the first day I walked into Chewton Glen. The porters were in dowdy brown uniforms, there was a really blingy shop and the menu was old-school Michelin. It was 1986 and I was 28, which is young to be a general manager, but the owner, Martin Skan, was very supportive of me and wanted change. It was quite formal; there seemed to be a rule for everything. No children under seven in the dining room, jackets required in the restaurant, strict meal times. We spent a lot of time changing things and we really built up the spa. Even today, Chewton Glen’s spa is one of the few really significant spa spaces in a five-star country house hotel.

At the age of 16, I wasn’t interested in doing much apart from chasing girls, and my mother said ‘well, you always liked messing around in the kitchen

Robin amassed eight years in that job, then decided it was time to strike out on his own.

“I was 36. I’d done a fair amount of working for others, and I thought ‘is that what I want to do for the rest of my life, or will I try and do something else?’.”

After I’d been at Chewton for eight years, I wanted to do my own thing, and when we opened Hotel du Vin in 1994 we had this tent card on the tables that seem crass now. ‘No dress code, children welcome, espresso machine.’ At that time, in the provinces, espresso machines didn’t exist on the high street. We put fresh milk into the mini-bars for the first time ever and changed the bedding to duvets and Egyptian cotton. In those days, everyone slept under duvets at home, but hotels still had blankets and sheets. Even in the first Hotel du Vin, we were delivering 30 litres a water a minute through the showerhead. Looking back now, they were easy wins, but it didn’t feel like it at the time. It was also in 1994 that he teamed up with his friend, Gerard Basset, a former sommelier, to launch Hotel du Vin in Winchester, Hampshire.

And it was his Hotel du Vin chain that made him a multi-millionaire.

Robin has built up another collection of hotels, called The Pig, since 2011. Currently with six locations across the south of England, the company behind the brand – Home Grown Hotels – generates annual revenues exceeding £20 million.

In order to raise the money needed, Robin says that he managed to persuade his wife Judy to agree to them putting up their house as a guarantee.

“It’s probably the bravest thing Judy has ever done, and thank God she did,” he says.

“I sort of passed the hat around to anyone we knew had spare cash,” says Robin.

Due to a lack of resources, the two founders were forced to roll up their sleeves.

“Gerard and I used to take time sleeping on the sofa to provide night cover,” he says.

“It was exhausting. We were doing everything from making breakfast to serving in the restaurant, but we were profitable in the first year.”

While those two things don’t seem imaginative now, Robin says that at the time they were “seen as revolutionary” in the hotel industry.

Hotel du Vin grew into a chain of six hotels, but on its 10th anniversary Robin and Gerard sold up to an investment group after they said they were given an offer they couldn’t refuse.

Robin went on to spend four years as the chairman of the Soho House private club chain. Then, in 2008, he set up a new five-star hotel in Hampshire, called Lime Wood. The first The Pig hotel opened nearby in 2011.

As was the case at Hotel du Vin, Judy leads the design of interiors at each The Pig location. Robin chose the name because he likes a well-known New York restaurant called The Spotted Pig.

Robin agrees that Brexit is a worry. “Everyone in the hospitality industry is concerned how staffing will tighten up,” he says

She adds: “Robin creates trends and experiences that tap into a new mindset… after noticing what was missing from the mainstream market.”

As UK operators, Robin agrees that Brexit is a worry. “Everyone in the hospitality industry is concerned how staffing will tighten up,” he says.

“In the industry, we generally rely on a lot of labour from outside the UK. About 25% of our 700 staff are non-Brits.”

When it comes to his plans for the future of The Pig chain and his other hotel business – the Lime Wood Group – he is keeping his aspirations in check. “I have no ambition to grow a 50-strong hotel chain,” he says.

“It’s not my thing,” insists Robin, who spent last December riding a motorcycle 7,000 km across Chile and Argentina. “I don’t know how many more I’ll open. It’s got to be the right property and the right location.”