The energy system worked reliably throughout the epidemic, thanks to the extra efforts of the employees of Elektroprivreda Srbije [Electric Power Industry of Serbia]. During this time of crisis, EPS when out of its way to meet the needs of all citizens.

The Covid-19 Coronavirus epidemic changed life and our everyday existence as we know it in record time, limiting movements and economic activity, but even during difficult times there are activities and occupations that don’t have the right to rest. There are always employees in the electricity sector, because a stable and high-quality supply of electricity is the first condition for everyone to be able to do their jobs and to enable Serbia to overcome one of the greater challenges in recent history. They have been, and remain, a pillar of support for citizens and the economy. Miners, engineers, fitters, dispatchers and all other EPS employees are the ones who enable enough electricity to be available for households and ensure the safe operation of hospitals, the police, the army, stores of food and medical equipment, grocery shops, pharmacies…

The energy system functioned reliably the entire time, thanks to the extra efforts of EPS employees. Sufficient electricity was produced for households where all occupants were together 24 hours a day, as well as for public facilities and industries that weren’t allowed to stop. Miners at the Kolubara and Kostolac opencast mines worked during the state of emergency, 24 hours a day, every day. Coal was produced as it is under regular conditions, because the continuous production of this resource is essential for the stable production of electricity. All thermal and hydro power plants worked continuously, and special emphasis was placed on the distribution and supply of electricity. Installation teams worked to the maximum in order to repair any possible network failures as soon as possible. It was crucial that there were no interruptions in the distribution of energy to healthcare institutions and, in particular, additional power was provided for so-called Covid-19 hospitals.

We don’t see EPS workers every day, but their work secures enough electricity for citizens. They contribute to the stable functioning of the state, and as many as 20,000 people worked hard every day, under very complex conditions, during the state of emergency.

At the company they say that every part of the EPS system is important, every person, which is why all protective measures were taken from the very first day. Workers received protective equipment, while all premises and the wider working environment were regularly disinfected.

“Employees are the greatest value of EPS and taking care of them is the top priority. We secured all protective equipment and strictly adhere to the measures that protect the health of workers during this difficult time of the fight against the Coronavirus,” noted Milorad Grčić, acting irector of EPS, speaking during the epidemic. “EPS has always been a stable pillar of energy for the citizens and economy of Serbia, especially when that was needed the most. Thanks to all employees, who participate directly in the process of producing coal and generating and distributing electricity and who take the situation seriously and respect the measures.”

“This job does not exist without people, but we know that we have to keep our distance, wear masks and gloves, and take care because of ourselves and our families, and especially because of our responsible job. There must always be electricity, and we’ve provided it in all difficult times, and that is now our most important task. It is always difficult at the mine, now especially, and it is no easier in power plants and on the ground,” says one EPS employee. “We are aware that many human lives would be endangered without electricity, and that’s why we are extra careful.”

During this time of crisis, EPS went out of its way to meet the needs of all citizens, not only those who were unable to pay their bills on time due to the state of emergency and the ban on movements. It was therefore decided to enable not only pensioners, but all citizens of Serbia to settle their financial obligations by the end of June and to extend the five per cent discount on all electricity bills during the state of emergency. 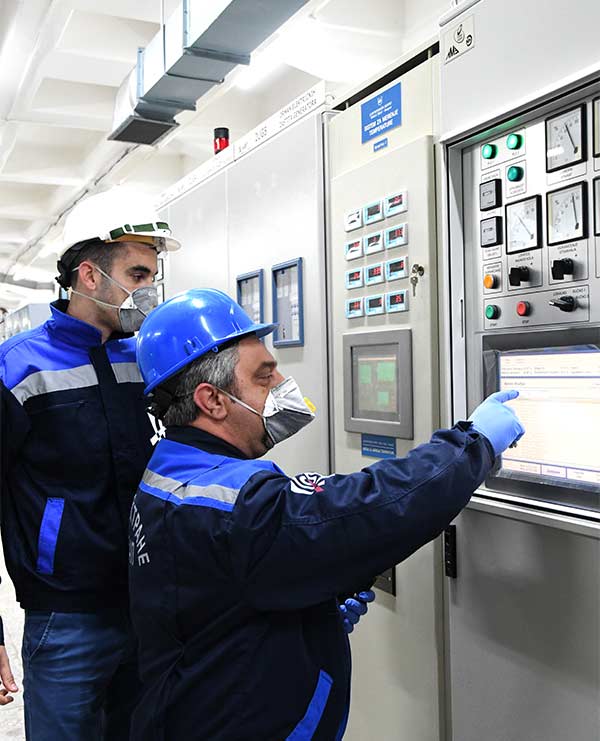 This relates to all three bills for electricity consumed during the state of emergency (March, April, May) and a five per cent discount will still be applied if they are paid in full by as late as 30th June. These discounts will be shown in the bill that arrives in July, i.e. the first following bill following payment. moreover, interest will not be calculated on any of these three bills for the months of the state of emergency, provided obligations are settled by 30th June.

Investment projects also continued during the epidemic. One of the largest projects at EPS, the construction of a desulphurisation plant at the TENT A power plant, is progressing at a very good pace.

“The largest environmental project in Serbia, on the construction of a flue gas desulphurisation system at the Nikola Tesla A Thermal Power Plant in Obrenovac, is progressing well and will enable sulphur dioxide emissions to be reduced 10 fold,” said EPS acting director Grčić, speaking during a tour of the plant’s construction site. “With this project we are not only guaranteeing clean air for Obrenovac and residents of Obrenovac and the surrounding area, but rather this project guarantees the extending of the work of TENT A, EPS’s largest thermal power plant. The contract for the desulphurisation system at TENT A was signed in 2017, while works are now progressing at an ever better pace and we expect the plant to become operational as of May 2023. This will reduce SO2 emissions on units A3, A4, A5 and A6 by as much as 10 fold.”

Along with ensuring the stable production of electricity, EPS is working intensively on the modernisation and expansion of its distribution network. New substations have been made operational and launched all over Serbia, in Ub, Lazarevac, Kruševac, Loznica and Gornji Milanovac. With this a high standard and quality of electricity supply is enabled for households and businesses. Better living conditions for citizens and infrastructure for opening new factories and building highways and corridors are created through EPS’s investments in Lazarevac, Loznica and Mionica. The 110kW Kruševac 3 substation, in which 140 million dinars has been invested, has been reconstructed and put into operation.

Mining production in Serbia during the first quarter of this year was nine per cent higher than in the first quarter of 2019, and production during April was six per cent higher than it was during April 2019. Miners managed to dig more coal even under the conditions of the epidemic. The production of electricity and total mining is expected to be higher in 2020 than it was in 2019, even under the conditions of the state of emergency. Miners and energy workers provide, and will continue to provide, a huge contribution to ensure the economy in 2020 will be among the best, from the perspective of GDP in the region, but also in Europe as a whole.

The key to improving the complex system of public enterprise Electric Power Industry of Serbia (EPS) is represented by investments in the modernisation of...
Read more

We Are Turning To Green Energy

Although at first glance you would not think that a global coronavirus pandemic had any good sides, in fact they do exist. Corona has...
Read more

Responsible and sustainable projects: The plan is for total environmental investments to reach 1.2 billion euros in the coming years Environmental protection and increasing the...
Read more