Ambassador of Japan in Serbia H.E. Katsumata Takahiko hosted a reception in his residence to mark the 140th anniversary...
Read more
22 May 2019
Facebook
Twitter
Email

Macroeconomic and fiscal developments and expected trends in 2019, measures that Serbia should implement in order to generate economic growth and opportunities for SME financing – were the key topics of a traditional annual meeting of Serbian Association of Managers (SAM) and the Fiscal Council of Serbia.

Other issues of relevance discussed at the meeting, attended by Stanka Pejanović, SAM President, Nikola Altiparmarkov and Vladimir Vučković, members of the Fiscal Council of Serbia, and Mirjana Vasilescu, CEO, Executive Board, Sberbank, included Serbia’s current economic growth of nearly two percent below its potential and what was necessary to increase the growth and facilitate private and public investments.

“The traditional meeting of Serbian Association of Managers with the Fiscal Council was opened with our question related to the communicated growth rates of between 3 and 7 per cent. We mainly focused on this budget year and projections by the end of the year because we within our respective companies revise our budget if actual macroeconomic trends differ from those we used in our planning. We wanted to hear from the Fiscal Council representatives whether we should expect a budget surplus, like in 2018, and whether the announced reduction of taxes and contributions on salaries would be executed this year. Members of the Association of Managers who manage 12 billion euros of revenue and employ 90,000 people actively participate in proposing solutions for faster development of a stable, transparent and predictable business environment. Today we have particularly highlighted the relevance of tax incentives for SMEs and the tax administration reform. Tax incentives for entrepreneurial funds which would invest in SMEs and development of non-banking institutions based on legislative solutions in order to accelerate SME growth and eventually contribute to an increase of investments and a change of its structure. An important issue we tackle is also brain drain, as statistical data show that 60,000 people leave the country every year. This raises a question of sustainability of pension funds and business in its present form,“ says Stanka Pejanović, SAM President.

Another topic of the meeting was the successfully completed fiscal consolidation – from a fiscal deficit of EUR2.2mn in 2014 to a surplus recorded in 2017 and 2018, with the sovereign debt reduced from more than 70 per cent to below 60 per cent of GDP. It was concluded that after avoiding the crisis, the fiscal policy in 2019 and the following years should tackle two major and unrelated challenges remaining after the successful fiscal consolidation completion: lack of public finance structure and low economic growth.

According to the Fiscal Council, Serbia recorded a fiscal surplus in 2018 of cca RSD32bn (0.6 per cent of GDP), resulting from a higher increase of public revenue than planned and a lower public expenditure than defined by the budget.

“Serbian Association of Managers and the Fiscal Council have once again exchanged opinions in a good atmosphere. We pointed out positive trends in our economy. We have macroeconomic stability, low deficit, but also insufficient economic growth and it’s time to provide the business sector with conditions for better and more successful operations, and the government’s future plans need to respond more efficiently to the needs of companies, their criticism and make their operations easier, from creating an environment for higher investments to business incentives. We also made a good introduction to the story about the survival of Serbia as a country, bearing in mind high brain drain, and that topic is closely related to economy and should be tackled more in the future,“ says Vladimir Vučković, a member of the Fiscal Council of Serbia.

SAM representatives have underlined the importance of further improvements in the business climate in the aim of increasing investments and economic growth, as well as a need to continue with strengthening the private sector. 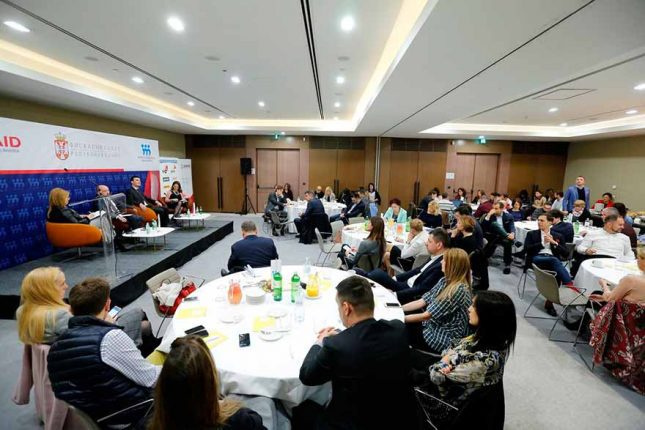 “The Fiscal Council points out to a very relevant fact – after the fiscal consolidation, it is vital to focus on facilitating economic growth, improving the business climate and developing the financial market in order to enable adequate financing of Serbian companies, particularly the SME sector, and to make room for new investments. The SME sector covers a large portion of the Serbian economy and it is a strong leader of growth in other countries of the region and Europe, while in Serbia it often struggles to survive. Therefore, that main topics at the moment are enabling adequate incentives for the SME sector so that it can respond effectively to requirements of the 4th industrial revolution, strengthening of institutions and reducing the rep tape and charges, as well as adequate and versatile sources of financing in every development phase of a business,” said Dragana Stanojević, Deputy Chief, USAID Cooperation for Growth Project.

The meeting with the Fiscal Council was organised in cooperation with USAID Cooperation for Growth Project.

Chief Economist Of The Fiscal Council

We’re Weakened As We Enter A Year Of Uncertainty

Despite being exhausted significantly by the health crisis, fiscal policy will have to play an important role, and perhaps a key role, in mitigating...
Read more

Sberbank Serbia Continues With Its Successful Operations In 2021

Thanks to excellent business results and significant credit placements in the area of ​​cooperation with private individuals and companies, Sberbank Serbia only during the...
Read more

Vladimir Bošković, Chairman Of The Executive Board, Sberbank Serbia

This Will Be An Exceptional Year

Sberbank Serbia has traditionally been a link and a bridge of partnership between the Republic of Serbia and the Russian Federation. And this is...
Read more

Vladimir Bošković, a seasoned senior executive and current Member of the Executive Board in charge of Corporate Banking and Global Markets, will be appointed...
Read more

Pavle Petrović, President Of The Fiscal Council Of Serbia

Marijana Vasilescu, President Of The Executive Board, Sberbank

A Link Between Serbia And Russia

Sberbank, one of the strongest banking groups in the world, surpasses its competitors in recognition and reputation, and for offering the most modern digital...
Read more