Investing In The Future Has No Cost

At the Čelarevo Brewery, which forms part of the Carlsberg Group, one of the world’s leading producers of beer, 224 million euros has been invested to date. Some €4.5 million was invested in 2017 alone, while investments worth €6.5 million are planned for the current year

With the opening of a new biomass boiler room worth a million euros, Carlsberg has clearly shown its strategic commitment to making numerous investments in Serbia and ensuring stable operations in order to achieve long-term plans and successful results on the Serbian market

Carlsberg has for decades been one of the global leaders in the fields of ecology, environmental protection and sustainable development. What forms the basis of your strategy?

– At a time when the entire world is facing challenges like climate change, water shortages and public health issues, the Carlsberg Group has adopted its SAIL’22 strategy and a programme for achieving sustainability under the title ’Together Towards ZERO’. It implies four major ambitions: zero carbon footprint, zero wastewater, zero irresponsible alcohol consumption and zero injuries at work. 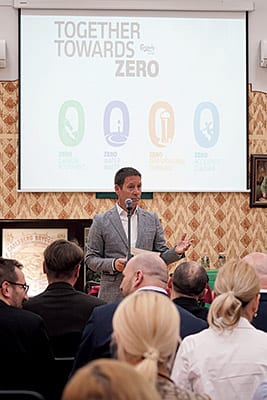 Although the strategy was adopted just a year ago at the Group level, we at Čelarevo are working intensively on its realisation. I will allow myself to note that we have become a pilot plant, a pilot brewery, so when people come from elsewhere in the Carlsberg Group to visit us, they ask if there is anything new and what we are working on right now.

As early as next week, in front of the Group’s most eminent experts in charge of energy, we will present in detail what we have done here, with our boiler room that works on biomass and biogas. The opportunity to present what we are doing to such experts, as well as the trust placed in us by the Group when we initiate new projects related to biogas, biomass and electricity, means more to us than financial benefits.

We are doing everything globally because we focus on the use of knowledge, as well as the development and improvement of existing knowhow and experience, all in order to develop sustainability and improve balance in the production process.

You announced last year that carbon dioxide emissions at your breweries will be reduced to zero by 2030 and that by 2022 you will use electricity produced 100 per cent from renewable sources. Are these really achievable goals?

– We are already working a lot on this, as evidenced by the opening of the new biomass boiler room, representing an investment worth a million euros.

Apart from being an innovation in the Serbian market, the new boiler room also represents a breakthrough in the overall operations of the Carlsberg Group. Our brewery at Čelarevo is the first Carlsberg brewery in the world that will use the implementation of this technology to contribute to improving its own energy efficiency and reducing the negative effects of production on the environment.

Within the framework of the Carlsberg Group, a lot of young people are employed and tasked with using their energy and broad perspectives to conquer alternative technologies and develop alternative principles of operations

By introducing this technology, alongside the pre-existing biogas boiler, we have more than doubled our use of renewable energy in the production process, which now accounts for 40 per cent. The biomass used as a fuel by the new boiler is an organic matter of plant origin or wood chips that are obtained by purchasing and breaking down waste pallets from the brewery itself. As a renewable energy source, biomass is CO2 neutral, which means that during combustion it emits exactly as much carbon dioxide as was bound to the plant through the process of photosynthesis during growth.

We have also invested in a CO2 station, a wastewater treatment plant, and now the new biomass boiler room, all of which clearly shows that we are heading in the right direction and that our plans and strategy are implementable.

It is estimated that as much as two-thirds of the planet could face severe water shortages by 2025. How does the Carlsberg Group combat water scarcity?

– We really look to see how this purified water can be used in the production process… for irrigation, cleaning, disinfection… 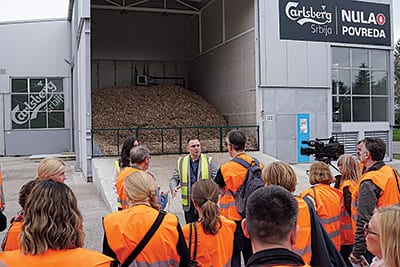 We are reducing year-on-year the amount of water needed to be consumed for the production of one unit of our finished product. We are even endeavouring to reduce to levels below those outlined in our development strategy, by moving to below three hectolitres of water per hectolitre of a product by 2022. And our current level of consumption is also considered very low.

Our wastewater treatment plant is technologically conceived so that in the process of wastewater treatment, among other things, biogas is produced replaces part of the natural gas used for the production of heating energy. Carlsberg Srbija uses this gas as a substitute for natural gas, in quantities of up to 18%.

So-called “super compost” was also created at Čelarevo and is used as a land cultivator. Is this “invention” being used by other breweries in the Carlsberg Group?

– “Supercompost” is created as a by-product in the wastewater treatment facility. It is practically sludge that has optimal levels of nitrogen, phosphorus and potassium content, thanks to which it can be used as an organic soil cultivator. By registering “super compost” as a cultivator, the amount of waste dumped at landfill sites has been reduced by half, and the aim was for waste to be handled in an environmentally sound manner.

“Supercompost” can be used as an additional fertiliser for field crops, vegetables, fruits and grapevines. Following successful implementation at Čelarevo Brewery itself, the ecological concept of “super compost” has been adopted throughout Europe at many other companies of the Carlsberg Group.

All products that are incinerated in the new boiler room, including ash and smoke gases, adhere to the legal regulations of the Republic of Serbia and the European Union, which means that they don’t have a negative impact on the environment

The Carlsberg Foundation was established with the aim of advancing science and education, preserving cultural heritage, protecting the environment, raising awareness of social problems and investing in future generations. How are experiences to date with the work of the Foundation?

– We launched the Foundation in 2015, with the desire of following all that is good, and everything left through the legacy of Jacob Jacobsen. We worked on nurturing history through investing in the future. We invest a considerable part of the Foundation’s funds in new young talents and talented future colleagues.

We have very good cooperation with universities – technical, technological, economic, legal – and the Foundation connects all of that through scholarships. Meanwhile, on the other hand, we also have an internal programme with which – through the model of work placements – we engage talented youngsters at the brewery and develop among them a spirit of proactivity, belonging, enthusiasm, a high level of energy and a desire to change things.

We are aware that no one can work along anywhere, not in any entity. In order to achieve good results, you don’t only need high-quality people, but rather people who can work with you as a team, to be committed to a common mission, vision and idea that precedes everything.

Avia Prime Group, one of the leading organizations for aircraft maintenance in Europe, consisting of three eminent companies including JAT Tehnika, organized a ceremony...
Read more

The European Bank for Reconstruction and Development (EBRD) has provided a loan of €21.4 million to Metalfer Still Mill d.o.o., Serbia’s leading manufacturer of concrete...
Read more