We’re Restoring Confidence In The Railways

In just six months, the new management of Srbija Kargo (Serbia Cargo), a national operator in the transport of freight by rail, has managed to reduce company’s debts, increase its volume of operatiobs and achieve good financial results without even raising prices. They have ambitious plans for this and the coming years.

For us, there are no strict working hours, free weekends and holidays, because we are striving to await the completion of the reconstruction of rail infrastructure with new and modernised locomotives, with refurbished wagons and new, rejuvenated staff.

The renewal of our rail transport infrastructure would lead to a significant increase in the number of goods transported by rail. What would it bring your company, as the most serious operator in this region? Are you already preparing for that eventuality?

– Everyone would benefit from the reconstruction of rail transport infrastructure, considering that there haven’t been serious infrastructure projects, reconstruction or modernisation for 40 years and that rails in Serbia are on average 49 years old. Srbija Kargo, as a national operator, provides all possible support to its colleagues from “Infrastructure”, even though those infrastructure works currently interfere with the regular, daily organisation of rail haulage operations. Thanks to their understanding and the relevant ministry, there is no complete “transport standstill”, rather work is carried out in so-called ‘windows’, so we manage to transport planned quantities of goods during times when the railways are not closed.

Srbija Kargo is taking important and serious steps in order to be ready to welcome the new infrastructure with the required load capacities and optimum torque of trains. We have just, with the consent of the European Bank for Reconstruction and Development, successfully completed negotiations with Siemens on the purchase of eight new multisystem locomotives. This relates to a 2010 tender that has not been implemented to date, and we are finalising it with a shortened delivery deadline and substantial financial concessions.

Those locomotives are ready to be driven in Serbia, Croatia, Hungary, Austria and Germany, and with all electrical systems that serve these railway infrastructures… We are trying to make saving and generate income wherever we can, so this year we will use our own funds to overhaul 1,100 freight wagons. We are a state-owned enterprise, but the state doesn’t furnish us with a single diner. On the contrary, we contribute 50 per cent of our annual profits to the budget of the Republic of Serbia and we strive to ensure that the amount is as high as possible.

Apart from that, we also take care to hire young people as our most important personnel, thus we currently have 100 trainees, and by year’s end, we will accept another 70 rail technicians, who will be transformed into railroad engineers after a year.
I am very proud of my team, which has achieved great results in just six months because we are leading Srbija Kargo as our own home.

There is daily communication between Srbija Kargo and the rail cargo companies of Croatia, Montenegro or Macedonia, which also communicate mutually. There are ever fewer outstanding issues between us, which is good both for our countries and for overall cooperation in the region

Is road haulage losing in the race against rail due to the ever-increasing waiting times and lengthy columns of lorries at customs checkpoints?

– Trains can never be held at borders for as long as lorries, nor can a lorry transport the amounts of freight that a train can over the same timeframe. Moreover, all of these haulage trucks, apart from polluting the environment, destroy roads with their weight, slow down roads and endanger passenger traffic. Road transport is losing the race against rail primarily due to these reasons, and only in the end due to holding times at borders. 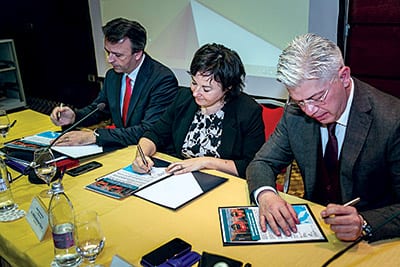 Product from the Smederevo Steelworks used to be transported 100 per cent by train, while today that figure is only 20 to 30 per cent, as road transport experienced expansion in the meantime. The reverse process is now underway, such that many goods, as we would say, are returning from the truck to the wagon.

The railroad is a must, and Srbija Kargo is making sure it is just that; that it has an active role in the market, runs a commercial policy and does everything to ensure rail transport costs are lower or on a par with road transport. If that were the case, everyone would opt for rail transport, because trains can transport incomparably more freight than lorries over the same period of time.

Although conditions are in our favour, we don’t wait for clients to approach us on their own – rather we are developing a commercial service that actively offers our services to businesses, explaining why that is good for them and what both they and the Serbian economy gain.

At this moment, we “hold” 96 per cent of goods haulage, and we guard every percentage point jealously and responsibly. Even our competitors now understand that Srbija Kargo is being run by responsible people who operate in market terms, and not by inertia

Naturally, all haulage companies are striving to increase the amount of goods they transport, but you are doing that without raising prices. Is that part of your basic strategy?

– We’ve chosen a tougher and more challenging route of opting not to raise the price of transportation services, despite some rail administrations in the region have opted for this measure, justifying it with inflation and growing costs. We have decided to increase the volume of transport and thus recover the money we would receive by increasing prices.

We made this decision due to the fact that foreign operators, in combination with private operators, are more competitive than us. They have a better starting position than Srbija Kargo, which is burdened with a difficult legacy in terms of the number of employees, collective agreements, obligations towards constituents from the time of the unified Serbian Railways.

Preliminary results and an overview of the situation after three months show that we are operating positively and that the volume of transport is satisfactory, while negotiations are underway for the transport of serious quantities of goods. All this shows that our decision was the right one.

We are reducing procedures, while we’re also endeavouring to change people’s attitude towards the job. As such, for example, it shouldn’t happen that five days elapse between us receiving an enquiry and sending a response, rather that should be done within a maximum of three hours. With this in mind, by the end of this year, we will complete our SAP information system, which will fully integrate all information on Srbija Kargo’s operations, and in parallel with that, we are also working on specific IT solutions, procuring new computers etc.

You cooperate successfully with rail administrations from the neighbourhood. Is that the right way to increase rail’s share in the goods haulage market?

– With the instructive experiences of national operators from the surrounding countries, which were struggling more than a decade ago, under free-market conditions, with a competition that naturally attempted to take over as much of their work as possible, we have established intensive cooperation with colleagues from the former Yugoslav republics, Bulgaria and Hungary. We realised that it is in our interests, both individually and collectively, to establish synergies, agree on active, even to make daily moves that enable us to ease our operations and make those of the competition more difficult, and in order for us to redirect significant quantities of goods from roads to rails.

And not only that… Srbija Kargo, along with our Ministry of Construction, Transport and Infrastructure, and along with colleagues from Croatia, Bulgaria, Macedonia and Hungary, is doing everything possible to reduce the holding times for trains and goods at borders.

We strive to avoid the doubling of procedures on either side of the border and to introduce shared stations, but this is hampered by the fact that Serbia is not a member of the EU. In the coming year, we will have the joint Tabanovci station, where the customs, phytosanitary inspections and railroads of both Serbia and Macedonia will be located, which will shorten retention times of trains at the border.

We’ll Be A Regional Leader

The European Commission decided this March to adopt a tenth freight corridor, entitled the ’Alpine-Western Balkan Corridor’, which represents a great success for Serbia,...
Read more