During the peak of the COVID-19 pandemic,...
Read more

Roche applies a flexible model through which, in cooperation with local health systems, prices are determined on the basis of the budgets of health funds and the effects they have on individuals

Exciting things are happening in medicine and healthcare is improving faster in this decade than ever before, especially in the field of oncology. Scientists have good news every day, giving patients new hope and possibilities.

However, when they complete their part of the job, it is equally important whether and in what way new therapies will be available to patients, says Roche Serbia General Manager Ana Govedarica.

What has led to such rapid progress in medicine?

-The concept of treatment is essentially changing. Molecular biology launched a revolution in the way we prevent, diagnose and treat diseases: personalised healthcare. As scientists have begun to understand, target, and diagnose illnesses on a molecular level, the approach to treatment has changed fundamentally. Cancer, for instance, is not one disease, but the result of innumerable genetic mutations. This evolving understanding of the disease is making it possible to create targeted medicines for groups of people with the drivers of the same disease, making a difference in the lives of many people with serious illnesses.

In the era of digital technology, we will increasingly be able to tailor medical treatment to the needs of individuals and small groups of patients, because we can review more information about how diseases manifest themselves and how patients experience them day-to-day.

At Roche, we are taking personalised healthcare toward a future where treatments are targeted to an individual’s needs and unique genetic profile. We look at this opportunity through the perspective of the purpose of providing a lasting contribution to patients, and as a company that has repeatedly proven, it can reinvent medical textbooks in every generation.

Roche has developed a unique footprint as a partner across the entire spectrum of modern healthcare, deeper and broader than most companies, by focusing on innovative diagnostics and pharmaceuticals under one roof.

Are these modern achievements available to patients around the world?

– One of the main challenges is to provide therapies in countries with completely different levels of economic development and possibilities. Patients in highly developed countries usually have more choices concerning therapies than in less developed countries. Roche, in order to expand the availability of its therapies, applies a flexible model through which, in cooperation with local healthcare systems, prices are defined on the basis of several different factors: from the budgets of healthcare funds, institutions and individuals, to the measurement of the effect of the drug within the therapy given to the patient.

At Roche, we are taking personalised healthcare toward a future where treatments are targeted to an individual’s needs and unique genetic profile

This system is fair, and patients and healthcare systems pay for the realistic effect of the drug. At the same time, the richest countries have agreed to Roche’s initiative to abandon the “same global price” principle, in order to make treatments available to patients in less-developed countries.

What is the situation in Serbia?

– Pressure on healthcare systems around the world is constantly increasing, primarily because people live longer; the population is getting older and their healthcare needs are increasing. On the other hand, it is proven that modern therapies improve the quality and length of the life of patients and in the long run reduce community costs through the faster recovery of patients and by increasing the working capacity of the population.

In this “juggling”, it is important that all participants in the healthcare system see the bigger picture and measure the effects of each decision: when and where to make savings, and where to invest to make the system more efficient. It is clear that countries with an economy like Serbia’s have rather a difficult task in providing patients with the most effective treatment. 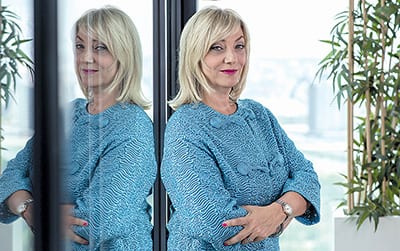 The several-year delay in placing innovative medicines on the so-called reimbursement list paid by the healthcare fund, on the one hand, and the rapid progress of the development of new therapies, on the other, are the main reasons why Serbia is still lagging behind in some therapeutic areas compared to the world and the region.

Over the past three years, the state has made visible progress regarding this issue by introducing managed entry agreements and allowing the use of certain innovative drugs, but also through regular payments of obligations to suppliers and consequent stability in the supply of medicines. Still, if we look at the figures, we have to conclude that there is still a lot to be improved.

Over the past three years, Serbia has made visible progress regarding this issue by introducing managed entry agreements and allowing the use of certain innovative drugs, but also through regular payments of obligations to suppliers and consequent stability in the supply of medicines

Is Serbia moving in the right direction in terms of improving healthcare?

– Pharmaceutical companies and state representatives have an open dialogue concerning specific actions to be taken to create a significant shift regarding the availability of the most advanced therapies in Serbia in the near future and to reach the coverage of the other countries of the region.

Roche has demonstrated an understanding for patients’ needs, as well as the economic limits of the state, and we are continually making great efforts to provide drugs under significantly more favourable conditions than in highly developed countries. At the same time, we are ready to partner with relevant stakeholders in order to support the modernisation and digitisation of Serbian hospitals, relevant patient registries, online CME projects etc.

In your opinion, what is of key importance regarding the wider availability of medicines in the years ahead?

– It is important that the pharmaceutical industry has an open dialogue and develops a partnership with the healthcare system. The mutual understanding, new models of financing and procurement of innovative drugs, stability and predictability could result in improvement regarding access to new therapies in the coming years. Investing in healthcare must not be reduced and an increase in the GDP should be accompanied by increased healthcare investments that will return much higher value to the society, as has been proven many times worldwide.

Foreign investments are an important lever of economic development that gain even greater importance under the conditions of the challenges to foreign policy and...
Read more

We Must Keep Pace With Upcoming Innovations

The essence of digitalisation in healthcare is in creating possibilities to bring the quality of patient treatment to the fore and enabling doctors to...
Read more