There’s Something In Metalac Polka Dots

Gornji Milanovac-based Metalac Group is preparing to celebrate its 60th birthday with fantastic results and ambitious plans. The year of their Jubilee will, they say, only confirm their consistency in being commercially excellent and socially responsible, which should not be doubted

A corporate culture, which supports the community and the development of people in a personal and professional sense, is one of our greatest values. We care about them, invest in them, and they return that to the company many times over with their dedication – says Metalac Group CEO Aleksandar Marković for CorD.

You’ve been at Metalac for 25 years. What has changed during that quarter of a century; and what has remained the same?

I arrived at Metalac during the time of inflation and sanctions, in 1993. As an export-orientated firm, Metalac didn’t have enough work, but the burden of the crisis was carried equally by all. Salaries were low and tended to vary, depending on the time of the day when they were converted into a Deutschmarks, and the management found a way to pay them twice a week, in order to ease that problem.

That was a big school for me, but, as a young engineer, what meant the most to me were the computers. Can you imagine my happiness when I entered my new office for the first time and saw the latest PC, with installed software for computer design? That convinced me that I was in the right place, and Metalac has since grown in every sense.

Your appointment is the result of a policy of selecting, educating and training employees, especially supervisors and managers. Will you also stick to the axiom that people are an irreplaceable resource?

I was nominated as the first among equals from a team of five executive directors, each of whom could have been in my place. That is the fruit of many years of work of the previous management team, and it is our duty to leave behind a new generation of managers able to lead the company.

We established the Metalac Foundation in 2006, because in the previous six months only one baby had been born locally, while last year we reached a total of 64. To date, we have utilised around 600,000 euros to welcome the births of 550 girls and boys, which is our best investment

The key for us in our selection of people are the Metalac’s 4Ps: Poštenje, Poverenje, Posvećenost, Poštovanje (Fairness, Trust, Commitment and Respect). This is the only thing around which there is no controversy, no dilemma and no deviation.

Your salaries are above the national average and always paid on time, while you also pay bonuses and scholarships for your young employees who are regular students… Do you have benefits for all?

There is no company that is sustainable over the long-term and which doesn’t seriously engage with its employees in one way or another. There are, of course, benefits that apply to all employees, especially when it comes to their children, but management bonuses, additional insurance and similar benefits are only available to those who have earned them. It’s important that employees know nothing is to be taken for granted.

Others discuss a population policy, while you are implementing one. Do all of your workers still receive from the Metalac Foundation 1,000 euros for their first child, 2,000 for a second and 3,000 for a third?

For a fourth – 4,000, for a fifth – 5,000 … and so on. Today, when young women abstain from establishing a family due to their work and careers, we prove that it is not only possible to fuse the two, but also desirable. We also provide support for employees when it comes to schooling for children, while we also own about 40 apartments that are given for lifetime use by couples without children and single parents.

Metalac kitchenware is among Europe’s biggest and most successful producers of kitchenware. Are there any homes in Serbia and the region that don’t have at least one of your enamelled saucepans?

I don’t believe there is, and supporting this claim is also data on market participation in Serbia and some countries of the region. 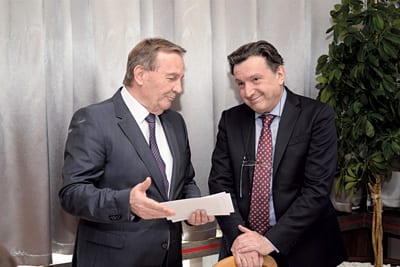 Metalac has been manufacturing kitchenware for almost 60 years and that is still the company’s main business and historical core. We are also unique in that we manufacture and enamel our products under the same roof, and that means both stainless steel and aluminium kitchenware with various inseparable coatings, and in that, we also have our own production of decorative stickers, handles and packaging. This enables us to offer our customers superior and authentic design, and good delivery deadlines, all at reasonable prices.

You export as much as 70 per cent of the kitchenware you produce to 25 countries worldwide. Do you have special product lines for each of them? Where are the most demanding customers?

In Western Europe, we mainly work for large chains or renowned wholesalers and appear under their trademarks. This is a good job for a manufacturer because you don’t have to worry about stockpiling and retail sales. In creating our own lines under the Metalac name, we need to understand the specificities of markets and be continuously innovative, which is why we appear every year at the Ambiente fair in Frankfurt to present around 30 different designs that we know to be ahead of their time.

According to your development strategy, you envisage revenue increasing by 16 per cent by the end of 2021, earnings growing by five per cent annually and profits reaching €6.6 million… Is that plan achievable?

No matter how pretentious it might sound, with good work and planning these plans can be realised. Provided, of course, there is no impact from risks that cannot be predicted, such as geopolitical escalations and the like.

Our investments always go in three directions – replacement of equipment, expansion of capacity and strategic adjustment, which, according to the new development strategy, is primary

For the next three or four years, we have planned investment projects worth 10 million euros, because there is no development without investment. We are also entering into the digital transformation process, both externally and internally, which is vital to our long-term sustainability.

The saucepan with polka dots has become an international souvenir that is sold throughout Europe. As one of our old clients from Germany says, that’s part of European cultural heritage. It is interesting how such a pot awakens emotions in everyone, whether they are from the former Yugoslavia, England, Germany… There is something in those polka dots.

Could you share with our readers the story of the three envelopes that each new director receives from his predecessor? 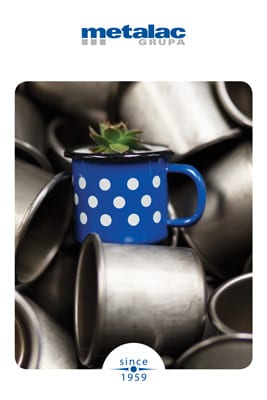 Company President Dragoljub Vukadinović introduced this custom on 4th April 2005, when he handed the director’s baton on to his long-time colleague. These envelopes contain instructions on what to do in the case of a problem arising for the company. In the first two are operational instructions on how to overcome a situation, and if that does not help, the last instruction reads: “Write three new envelopes”.

This story shows how no manager is there by the grace of God, but rather must achieve results.
My predecessor didn’t open those three envelopes, so I inherited them untouched on 4th April this year, also from president Vukadinović. I then promised myself that if I had to open them, I would open the third one immediately.

Metalac entered your jubilee 60th year of operations. When you celebrate, the whole Milanovac gains. What are you preparing for the anniversary?

Gornji Milanovac gains every day with its Metalac, which has 2,150 employees. We have developed new programmes in the last 10 years and are slowly returning the Factory of Automotive Parts to the path of success, just as we reinvigorated trade enterprise ‘Proleter’. We secured full operational employment for 450 new workers, built a modern football stadium, continued to help six sporting clubs, to encourage birth rates etc.

Business, as usual, is not an option for Serbia and the Western Balkans, which is why the new industrial policy should be sector-specific and...
Read more