Taste Of The Exotic

The Aleksandrović family has been engaged in viticulture and winemaking for almost 120 years. As the owners of 75 hectares of vineyards, they produce wines exclusively from hand-picked grapes that they cultivate themselves. This has resulted in more than 250 of the most prestigious awards from around the world

All experience and knowledge gained over the course of 120 years have been incorporated into the family wines of the Aleksandrović Winery. Modern technology and contemporary scientific knowledge came later, but if it wasn’t for their heritage and the transferring of experience from generation to generation, these top wines certainly wouldn’t exist.

Your family has been engaged in viticulture and winemaking for almost 120 years. Have the working methods, recipes and secrets of producing top-quality wines been passed down from generation to generation?

Tradition and heritage are very important in the production of grapes and wine, because grapevines have been grown in this region since the time of ancient Rome. History also reminds us of very important facts, such as the choice of grape assortments, choice of expositions, terrain, land etc. These are all legacies from the past that we must respect in order to continue the tradition and plant the highest quality grapes in the best locations.

Apart from my family, the royal Karađorđević family, which in the 1920s planted vineyards on the south-eastern slopes of Oplenac with a high-quality grape variety imported from France, also played a great role in the development of viticulture and winemaking in this area.

In the time of your great-grandfather Miloš, who started the whole story, everything was made by hand, and even today your grapes are picked by hand? How do you do that with so much surface area?

If we aren’t mistaken, you have 75 hectares of vineyards! If you wish to produce top quality wine, it is essential to incorporate a lot of knowledge, but also a lot of hard human labour. Harvest time is one of the most beautiful moments in the year, when you are rewarded by nature for all that you’ve done well during the course of the year. Pruning is carried out by hand, bending the bows, pulling up the shoots, thinning out the leaves and excess fruit, and finally harvesting. This is a job that requires over 400 hours of arduous human labour per hectare annually. We succeed because we have a trained team of winegrowers, who manage to perform all these operations on time and in a high-quality way.

Your winery has a long and rich history, but we mustn’t overlook the new stage, which only began in the year 2000 with the construction of modern facilities and the purchase of state-of-the-art equipment. Was that when this incredible success started?

We monitor world trends and styles constantly. It is essential to have a winery, equipment, knowhow, technology and, most importantly, professional people who nurture wines every single day. Over the last 20 years we’ve built a winery that can receive grapes and produce top quality wines from our 75 hectares of vineyards. We’ve procured the latest equipment, have a team of people who’ve been working together for more than 10-15 years, led by chief oenologist Vladan Nikolić, who is one of the region’s greatest wine experts. So, our success is the result of teamwork, the latest scientific knowledge and the investments that we’ve made in the last 20 years.

One could say that Serbian wines are becoming recognisable and appreciated beyond the borders of our country. As one of the leaders of the “new wave” of Serbian winemaking, how do you see the future of wines from our country?

I’ve been saying for a long time that Šumadija has some specificities that set it apart from other regions. The wines created under this piece of sky, on this piece of land, exude elegance, have a beautiful body, good balance and a richness of aromas. We also mustn’t forget the favourable climatic factors, the hilly landscapes and the strength of the Šumadija climate, all of which are woven into our wines. The synergy of numerous factors is incorporated into the quality of Šumadijan and Serbian wines, and the result of that is the medals that we’ve won over the last ten years at the most prestigious world competitions. Our wines carry within them a diversity that can be explained in one word: exotic. Wine critics, traders and wine lovers around the world are increasingly paying attention to Serbian wines, which are appearing on wine lists in Europe and around the world. I believe that in the future we are awaited by a significant place on the wine map of the world.

You started triumphantly with your wine Triumf [Triumph], but Harizma [Charisma] and Vizija [Vision] also soon imposed themselves on the scene, along with some other new wines. Could you single out just one as your favourite?

That would certainly be Triumf, our guiding star and the wine that paved the way for all other wines from our palette; a wine that has an authentic history. Triumf was produced back in the 1930s by the Royal Winery at the foot of Oplenac Hill, and with its quality it made it all the way to the royal courts of the United Kingdom, Romania and Yugoslavia. In an original handwritten manuscript, the recipe for the production of Triumf was sent to my family by the king’s cellar-man Živan Tadić, and since 1992 we’ve been applying an identical composition of varieties, which in a way deserves the most credit for the glory that Triumf has brought all these years. Of course, we have incorporated new knowledge and modern technology into it, so today Triumf is inscribing some new pages in the viticulture and winemaking history of this region. 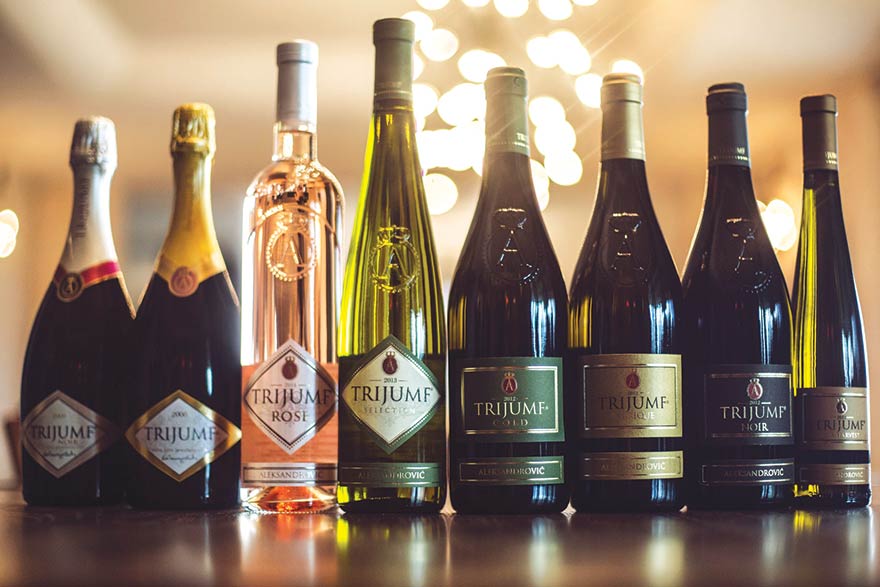 Over time, we’ve planted new vineyards and produced new wines. Sparkling, white, rosé, red, late harvests etc. As the vineyards age, red wines distinguish themselves. Over the last ten years, that’s been the Regent Reserve, which has a cult status among Serbian red wines. And there’s also Rodoslov, as one of the most awarded and highest quality red wines. We are particularly proud of our wine from the indigenous Prokupac variety, which occupies a significant place in the rich range of Aleksandrović Winery.

Do you count your awards? Which is the most recent and which is the dearest to you?

Each of the more than 250 international awards is special in its own way, because it is the result of a great effort and the work of an entire team of people. Perhaps the dearest awards to me are the ones that are most recent. Triumf was officially declared the best wine in the Balkans at a recent competition that included the participation of wines from Romania, Bulgaria, Turkey, Greece, Albania, North Macedonia, Montenegro, Croatia and Serbia. In competition alongside a large number of wineries and wines, the Triumf Selection 2019 was declared the best wine in all categories, which gives this award a special charm.

Is it true that wines from the Aleksandrović Winery are included in the World Wine Museum in Bordeaux and on the wine lists of the world’s most prestigious hotels and restaurants?

When the Cité du Vin, the world wine museum, opened in Bordeaux five years ago, the wines of Aleksandrović Winery were chosen in the first exhibition and were among the world’s most prestigious wines. This is one of the greatest achievements, because wines from such a small country as Serbia, which is almost unknown in wine circles, especially when it comes to the production of top wines, found themselves among such giants as French, Italian, Californian, Spanish and Portuguese wines. This is an acknowledgement of many years of work and continuity of quality.

Our wines have been on the wine lists of prestigious restaurants, hotels and wine bars for ten years, starting from Tokyo, via Shanghai, Hong Kong, Moscow and Western European cities, all the way to New York, Chicago and Los Angeles. We would say that a beautiful wine story has spread, and we are proud that our wines are also ambassadors of our country worldwide.