Torbjørn Brovold – Audun Farbrot is the author of two books on science communication and Head of Science Communication at Scandinavia’s leading business school, the second largest such school in Europe.

He works every day on sharing knowledge and changing communities for the better step by step. When writing a text, whether a memo, an article or a book, it is all about the words, phrases and sentences. You can’t hide your message and thoughts behind a great look, charming smile, eye contact with your audience, funny stories or appealing body language. So you really have to work hard on presenting your ideas, thoughts and perspectives in an effective language.

You work on helping scientists and researchers share and communicate their knowledge with the world so that societies benefit from science-based findings and research, the general public becomes more interested in science and fellow scientists get more excited, connected and creative. What an interesting job! What are some of the best moments or experiences regarding your work?

– You are absolutely right; this really is a fantastic job, simply a dream job. When I wake up in the morning I am looking forward to contributing to changing the world, at least a little, every day.

The best moments in my work are undoubtedly when I experience young, talented researchers and experts succeeding in sharing and communicating their knowledge to new audiences, either through the media or directly to practitioners in business life or public organisations. I invite knowledge workers to challenge and expand their comfort zones and train them to be more effective communicators.

Seeing them getting out of their ivory towers and sparkling in the public limelight gives me a strong feeling of meaning. It also makes me happy to see examples of value creation in society as a result of public communication of research-based insights and knowledge. I believe strongly that science communication is a powerful tool leading to better decisions among politicians and business leaders, smarter ways of doing things and new products and services.

The best moments in my work are undoubtedly when I experience young, talented researchers and experts succeeding in sharing and communicating their knowledge to new audiences

There must be some challenges as well – what are they and how do you deal with them?

– I believe challenges really are core elements of meaningful jobs. In a nutshell, my work consists of making people do things they didn’t even think they were up to, with few or no direct incentives to do so, and with absolutely no time available to do that. Sounds like mission impossible, right? What I can offer is personal advice to increase the chances of succeeding in getting an article published in the media, for example.

In many ways, you might say, I am a communication coach or personal trainer in public communication. It is fair to say that some professors at universities and research institutions behave like prima donna’s, in many different ways. But they are also humans, who flourish when other people show interest in their work. That mechanism makes the mission impossible actually possible, after all.

Your second book, Social media for scientists, PR consultants and experts, has been translated and published in Serbia. Both Serbian and Norwegian could be called “small” languages when it comes to the number of people who speak them. Is it important for science communication and knowledge sharing to try and use “smaller” languages more? 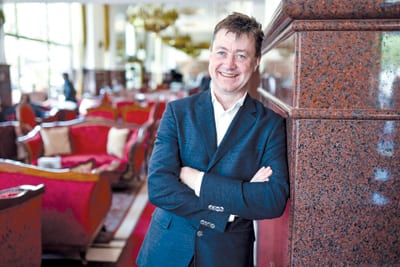 – Language is not only a practical tool for written and verbal communication but is also a bearer of culture, history and national identity. On the other hand, I believe that sharing science and research-based knowledge across national borders is the best way to create a better world and a better future for our children.

My answer to this might be slightly inspired by Winnie the Pooh confronted with the question “Honey or condensed milk with your bread?” I think we should communicate knowledge both in our “small” national languages and in English, which holds the position as the international language of Science and Research, whether we like it or not.

Was this the first translation of your book? How did it feel? Were you excited, surprised… when you heard the news?

– I had already been thinking about translating my book into a foreign language, but I have to admit that Serbia was not the first country I was thinking about. So, I was surprised and delighted when my publisher told me they had been contacted by Belgrade-based publishing house Kovačnica priča. This is the first translation of my second book. And now that the book has materialised and is published, I think it is really cool.

Speaking of the book, we can say that the idea of sharing knowledge through social media is relevant, useful and inspiring. But scientists, researchers and different experts are usually already (too) busy with multiple projects and duties. Why should they use their time for social media as well? How do you motivate them to do so at BI Norwegian Business School, where you’re in charge of science communication?

– It is not enough to tell them why they should consider sharing knowledge via social media, rather you also have to demonstrate the effects and possible advantages of doing so. In addition, it’s important to help them get started.

Here are some of the benefits I demonstrate through practical examples and evidence from research on science communication.

Content is king, even in Social Media. The key to success is regularly sharing knowledge and insights of interest, relevance and value for your readers

Experts who use social media in communicating knowledge increase the probability of being found in the way she or he wants to be found – for their professional expertise. By sharing the knowledge you also strengthen your academic recognition and contribute to increased value creation for society.

Thus, Social Media can be much more than media and communications channels.

To paraphrase William Shakespeare: “To be found or not to be found” online matters.

Is there any special advice, tips or inspiration you would share with a scientist wanting to try to communicate their knowledge through social media?

– Content is king, even in Social Media. The key to success is regularly sharing knowledge and insights of interest, relevance and value for your readers. You need a website for publishing content, for example, a web page, blog or home page. This is your knowledge hub. In addition, you should consider using one or two services for sharing this content, for example, LinkedIn, Twitter or Facebook. And you really have to listen to the conversations of other people on social networks. That’s an inherent part of being social and really communicating with people.

During your studies at BI Norwegian Business School, you were on exchange at ESCP Europe in Paris. As someone who works in an international environment at the second-largest business school in Europe, It’s a safe bet to say that you deal with intercultural communication a lot as well. Are there significant cultural differences in the ways we communicate?

To overcome cultural differences you really have to be willing to be open and learn as much about the people you are to communicate with and be able to adapt your communication accordingly.

What are some of the main things to remember when communicating with Norwegians – whether that is business, science or general communication?

– Norwegians might appear shy and distant until you get to know them. They are not world masters in phrases of politeness; they tend to be very direct in their communication. Norwegians believe in equality, living in a social democracy with relatively small power distances. Gender equality is also important.

The typical Norwegian is future-orientated and enjoys planning their activities, both at work and in their leisure time. Norwegians score relatively high on people-orientation and like working in teams and groups.