Activities of the Slovenian Business Club

The Slovenian Business Club in Serbia forms a stable, unbreakable bridge between the economies of Serbia and Slovenia that has been fulfilling its mission successfully for 16 years already. The club works on the continuous advancement of cooperation between the Serbian and Slovenian economies, as well as regional connections, with a focus on member companies and their needs.

The SBC, on the one hand, organises events at which members gather, network, exchange experiences and information, educate and create opportunities for future business cooperation, while – on the other hand – it works with companies to find solutions to specific problems and offer them support in finding potential partners for cooperation.

Lecture on Leadership in the 21st Century 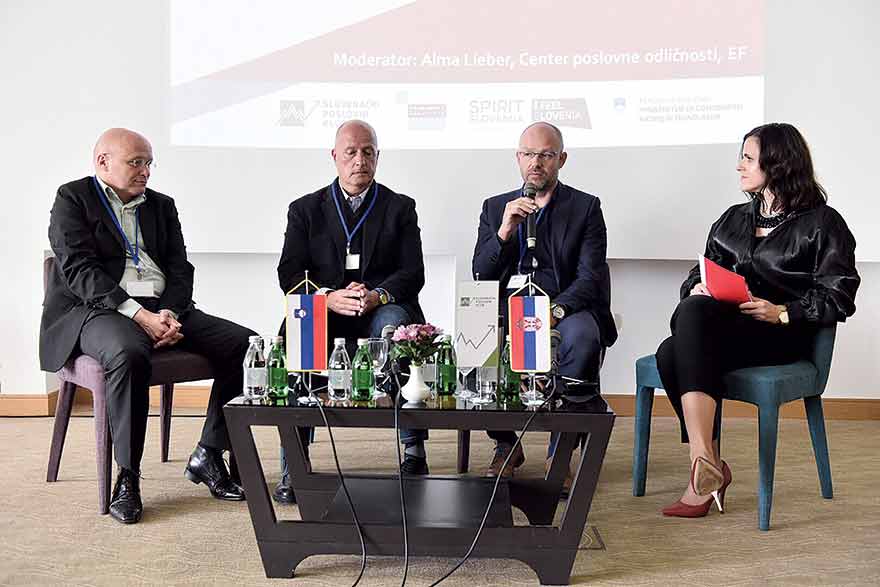 The Slovenian Business Club organised a working breakfast in May 2019 in cooperation with the Ljubljana Faculty of Economics, which is the third college worldwide to include neuro-leadership in its MBA programme. The main guest, Nikolaos Dimitriadis Ph.D., revealed to participants the ways in which the latest neuroscience discoveries can help leaders understand how brain functioning improves approaches to leadership, what the difference is between brain and mind etc. The lecture was accompanied by a panel debate on leadership in the 21st century, with the gathering culminating in a cocktail reception.

Under the scope of the 63rd International Fair of Techniques and Technical Achievements in Belgrade, and under the joint organisation of the Slovenian Business Club and the Embassy of the Republic of Slovenia in Serbia, a panel discussion was held in May on the topic “Industry 4.0, Slovenia-Serbia, Digital Transformation of the Economy”. The panel discussion was opened by SBC President Danijela Fišakov, while those in attendance were addressed by H.E. Iztok Jarc, Ambassador of the Republic of Slovenia to Serbia, and Goran Križ, economic advisor at the Embassy, while the panellists included representatives of companies operating successfully in Serbia. 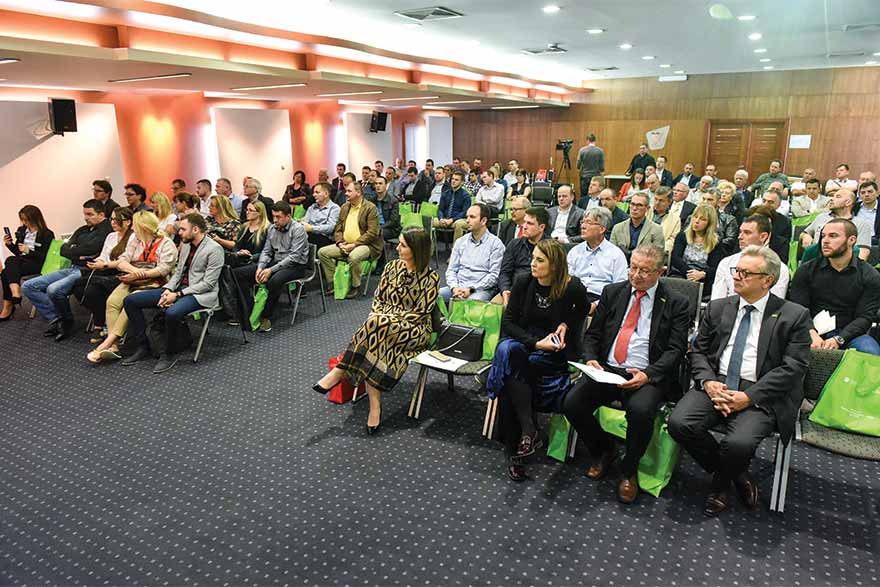 The panel included discussions of the direction in which the digital transformation of industry is moving, the experiences of companies that apply Industry 4.0 solutions, and whether Serbia has the potential to export software solutions and technically demanding products worldwide. 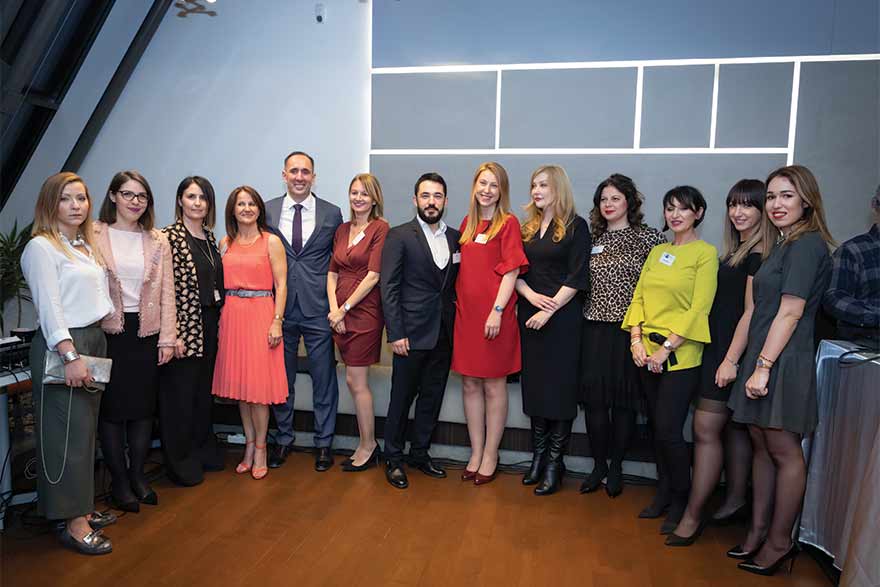 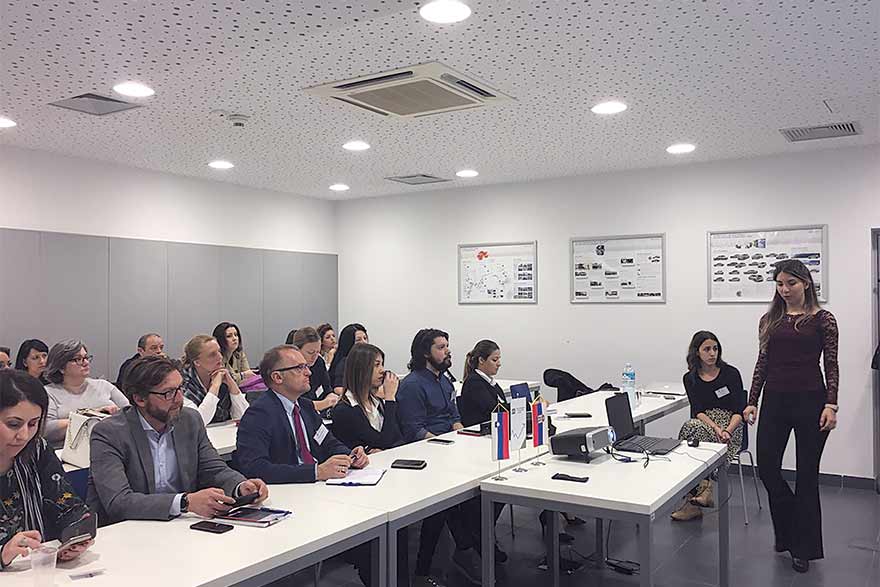 In cooperation with Belgrade-based agency and SBC member company Degordian, the Slovenian Business Club organised a working breakfast on the topic “Implementing Marketing Strategies on Digital Communication Channels”. Representatives of Degordian took the opportunity to present online strategies that should be implemented with the aim of raising brands’ digital visibility, while participants were also introduced to the goals of digital marketing.

The third, most important and highest-attended Serbia-Slovenia business forum, under the title “Digitalisation of Economy and State”, was organised at the Palace of Serbia on 28th January 2019. Opened by the respective presidents of the chambers of commerce of Serbia and Slovenia, Marko Čadež and Boštjan Gorjup, participants were then addressed by the presidents of both countries – Aleksandar Vučić and Borut Pahor. 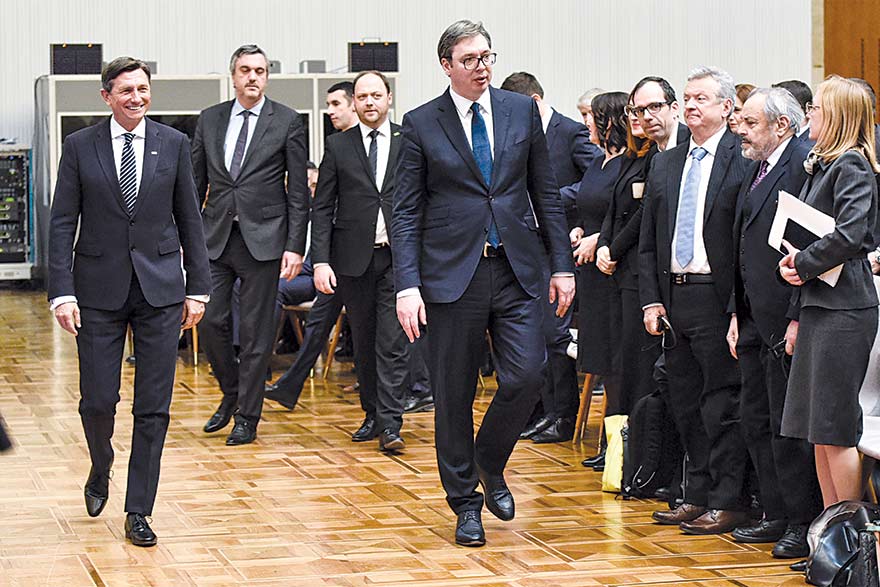 Best illustrating the growing interest in cooperation among business leaders of the two countries was the record number of participants. They included more than 600 people from around 400 Serbian and Slovenian companies from all sectors, mostly from the IT and tourism industries. More than 250 B2B meetings were held under the auspices of the forum.

At its first working meeting of the year, held at the end of January, the Slovenian Business Club, in collaboration with the German-Serbian, Swiss-Serbian and Italian-Serbian chambers of commerce, hosted representatives of the European Union Delegation to Serbia. 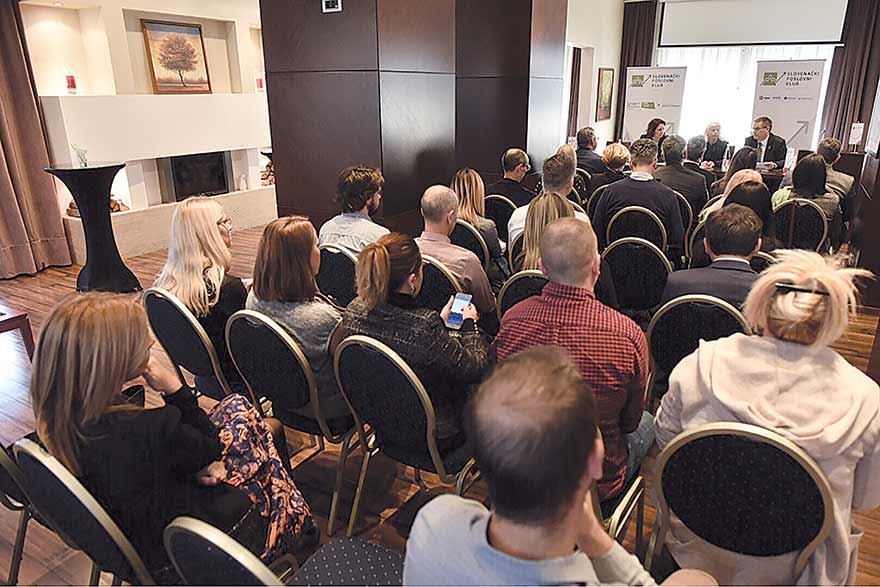 Discussion topics included Serbia’s advancement towards the European Union, opportunities to improve the business and investment climate in Serbia with the help of EU funds, environmental standards, the development of transport, border crossings, the importance of continuous work on the rule of law and media freedom in the Republic of Serbia.

The Slovenian Business Club celebrated 15 years of successful work and stable growth within the scope of its New Year’s reception at Belgrade’s Hyatt Regency Hotel. On this occasion, SBC President Danijela Fišakov presented notes of thanks and gifts to individuals, institutions and companies that have provided specific contributions to the SBC’s development.

“From its inception until today, more than 600 companies have been among the membership of the Slovenian Business Club, while its events have been attended by more than 40,000 participants. Each of them inscribed some letter with their own style and handwriting, while some have even written entire pages in this success story of ours. I thank them,” said SBC President Fišakov.

On the occasion of the signing of a protocol on the implementation of the Agreement on Employing Citizens of the Republic of Serbia in the Republic of Slovenia, the Slovenian Business Club organised a working meeting in early November 2018 that was attended by Slovenian Labour Minister Ksenija Klampfer and representatives of the ministries of labour and social affairs of Slovenia and Serbia. 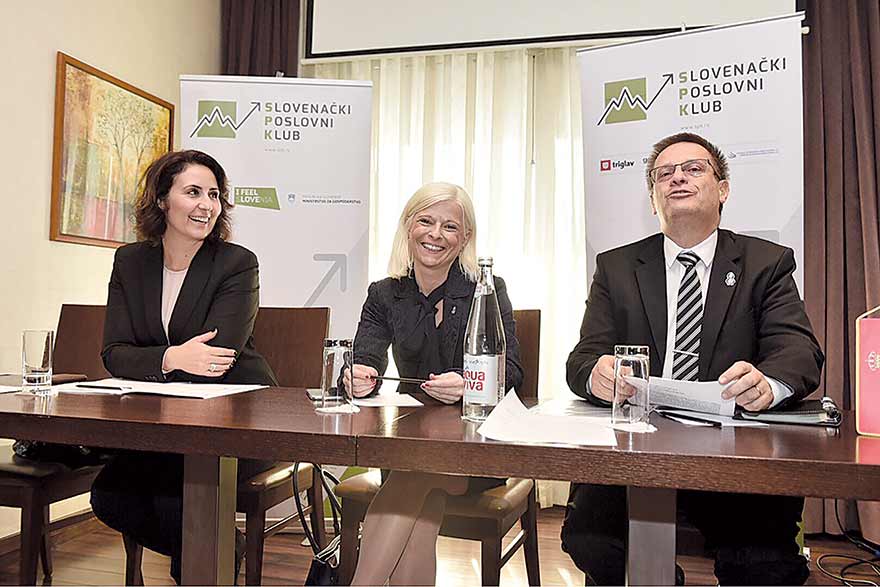 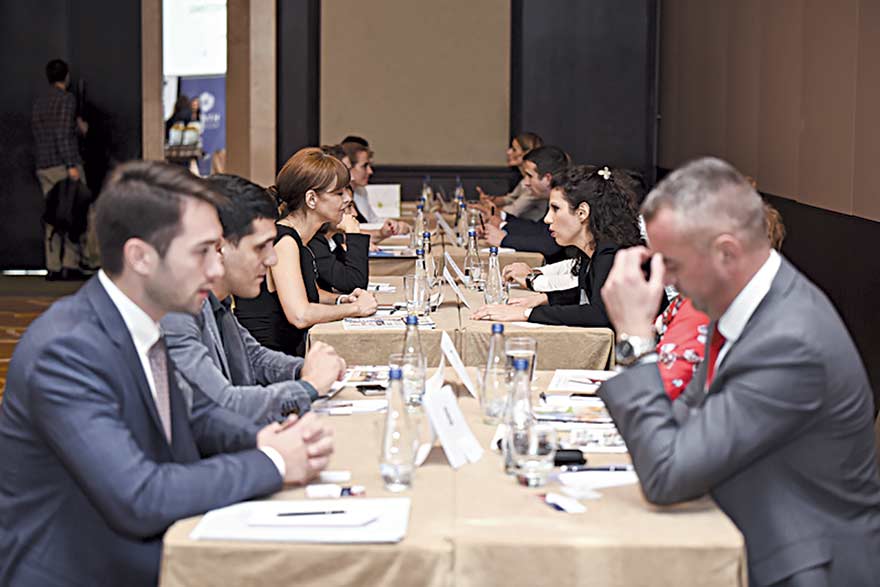 In ten-minute one-to-one meetings, representatives of 41 companies presented their services and products, with the culmination of the meetings followed by a cocktail reception held in the hotel.

Under the organisation of the Slovenian Business Club, the fifth Martinovanje – a holiday marking the arrival of young wines – was held at Belgrade’s Ser Gilles Restaurant and attended by a record 220 guests. 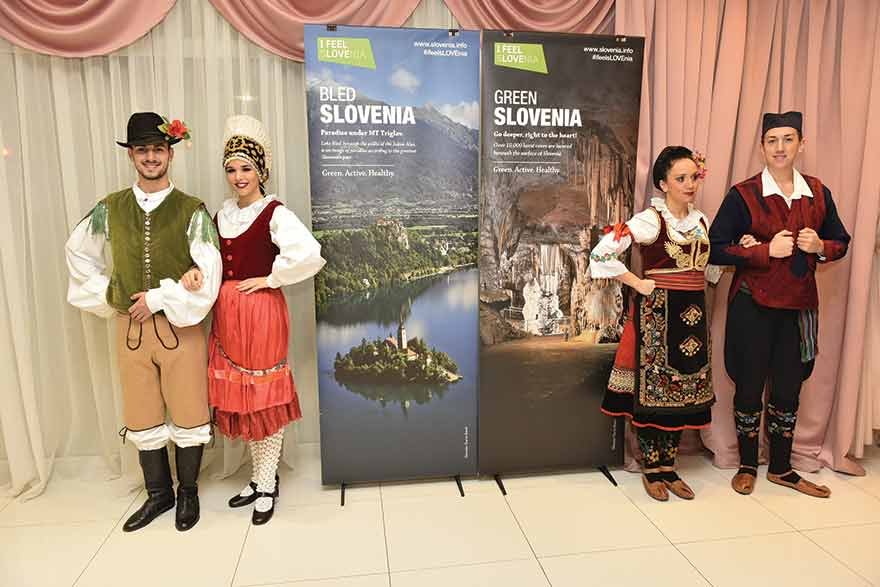 Martinovanje is celebrated annually in Slovenia on 11th November, but last year it was marked in Belgrade on 26th October. Martinovanje represents a form of promoting Slovenia as a tourist destination, and this time the event included the presenting of two of the country’s vineyard regions – Brda and the Vipava Valley.

The Slovenian government has formally submitted to the UNESCO Secretariat in Paris the multi-national bid for placing the Lipizzan horse breeding and related practices...
Read more

On 12 March 2020 Slovenia declared the epidemic due to the increasing number of cases of coronavirus infection. The expert opinion of the National...
Read more

The national airline of Serbia, Air Serbia, due to increased demand, will increase the number of flights on certain...
Read more
Cord MagazineLeaders Meeting Point