For several years now, Romanian painting has been touted as the new big thing. The contemporary art world is, of course, constantly awash with talk of the next sensation, but where there’s smoke there’s usually some degree of fire, and the moody virtuosity of Romanian art is certainly worth serious attention

In reality, recognition has been measured but steady; as slow-burning as the smouldering art itself. While the majority of names associated with new Romanian painting remain fairly low-profile, others, such as Serban Savu and Adrian are already highly coveted by tuned-in collectors. And their successors, a younger generation of Romanian artists, are starting to prove just as compelling.

Also of interest, however, is the background to Romania’s contemporary art renaissance, which shows striking parallels with the success of the Leipzig School, the former East German academy whose alumni were catapulted to international stardom at the start of the noughties.

Many of Romania’s new artists are likewise connected to a particular institution: the painting department of the University of Art and Design in Cluj-Napoca, a small city located in northern Romania in the heart of Transylvania (below, left).

Under communist rule, Romanian art education adopted the rigorous figurative requirements of socialist realism; Cluj, always one of the country’s most renowned academies, maintained these traditions after communism’s fall. Its painters display the same virtuosity that contributed so highly to Leipzig’s appeal, but it’s at this point that comparisons start to falter.

The so-called Cluj School has its own, distinctive style: a looser use of paint; a less pronounced (though still evident) emphasis on surreal elements; and, most obviously, a far more sombre appearance. New Romanian painting tends towards darkness, both literally and metaphorically.

Many commentators have suggested that contemporary Eastern European art, particularly that from the Balkans, is still in the process of expurgating decades of trauma. The schisms created by years of the communist rule followed by its sudden disintegration and the destabilising effects of capitalism are inescapably evident in the region’s cultural production.

The generation of Romanian artists who grew up amid such uncertainties certainly document these tensions. Interestingly, however, several spent time abroad at key phases of their artistic careers – Serban Savu in Italy; Adrian Ghenie in Austria; Victor Man in Israel – a distancing which seems to have contributed to a more neutral – even sympathetic – appraisal of their heritage.

The so-called Cluj School has its own, distinctive style: a looser use of paint; a less pronounced (though still evident) emphasis on surreal elements; and, most obviously, a far more sombre appearance. New Romanian painting tends towards darkness, both literally and metaphorically

Their work frequently seems as wistfully elegiac as it does critical or uncertain, mournfully aware of the rupture between old and new and the difficulties of reconciliation memory or nostalgia with history.

Indeed, in many cases, the crepuscular light that infiltrates Romanian painting can be seen as representative of hazy indeterminacy rather than the bleak, condemnatory negation with which it is often associated. The motif of a deer dazed by headlights, one used by various painters, seems a particularly apt expression of this bewilderment.

Such inheritance is difficult to surmount or ignore, and younger Romanian artists continue to express the difficulties of coping with tumultuous change.

Their approaches, however, are increasingly diverse: Veres Szabolcs, for example, focuses on Romania’s classical artistic heritage to explore a contemporary state of mind. Figuration is still the dominant painterly mode but often accompanied by gestural, expressionistic accents. And a growing concern with the portrait study – not only among emerging artists but established painters such as Adrian Ghenie (left) – seems to attest to increasing interest in notions of identity-less contingent on the politics or processes of reform.

Romanian international prominence is rapidly on the rise, but perhaps it’s more instructive to view the roots of Romania’s contemporary renaissance as a further addition to a global body of the artistic response to unprecedented political and social transition. A theme which, from the likes of China, Poland, Iran, India has come to dominate the last two decades of art, but which never loses its relevance, or power to compel.

Born in 1967, Victor Racatau completed both under-graduate and post-graduate studies at the Cluj University of Art and Design, making him in many ways a quintessential exponent of the so-called ‘Cluj School’.

The inscrutability of fate and hazardous nature of chance is a dominant theme in his work, exemplified by motifs such as the throwing of dice. 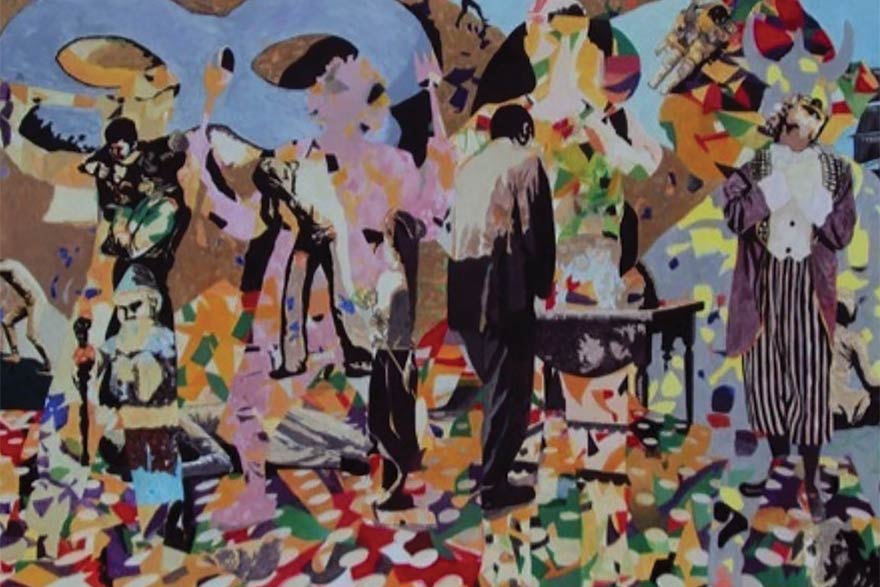 Labyrinths and maps also occur frequently, used by Racatau to represent the attempted ordering of psychological and historical space.

Combining brooding grisaille with instances of intensely luminous colour, Racatau’s chromatic schema serves as a literal rendition of metaphorical light within the darkness; the flickering brilliance of insight and possibility glimpsed from within a dark cloud of unknowing.

Born in 1978, Mircea Suciu considers his work “painting for ‘voyeurs'”, and as we gaze at subjects engrossed in their own activity, backs to the viewer or unaware of being overlooked, it’s a definition that captures the sense of intrusion his works intend to evoke.Our own focus on the act of looking is frequently mirrored within the canvas itself, with Suciu’s protagonists searching or observing, rapt in inexplicable pursuits.
Darkly tinged with the surreal, these paintings – despite their relatively simple composition – provide plenty for the voyeur to consider.

Born in 1976, Hausi’s family was highly politicised, subject to surveillance by Romania’s communist regime and continually under the threat of interrogation. Little wonder, then, that uncertainty and paranoia are strongly reflected in the artist’s work. 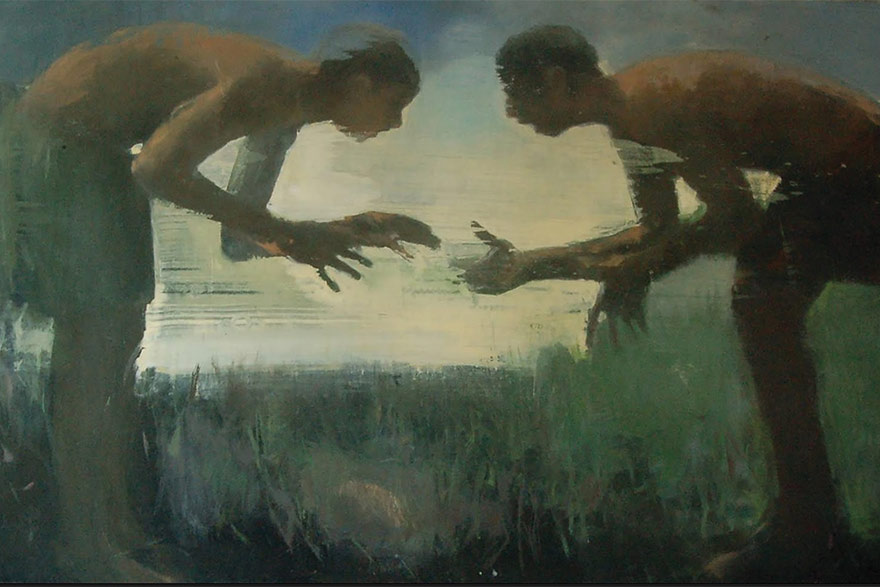 Hausi’s tenebrous chromatic scale is matched by his reluctance to fully delineate and reveal. Secretive gesture and semi-obscurity lie at the heart of Hausi’s world, a place marked by past shadows and his own disinclination – or inability – to fully emerge from them.

Forest glades filled with grazing deer; looming mountains; the moon. Radu Comca relentlessly strips away the romantic potential of such subjects to create images in which ‘appropriate’ emotional registers seem uneasily absent – even a comparatively lush landscape (below left) is revealed to be a diorama. 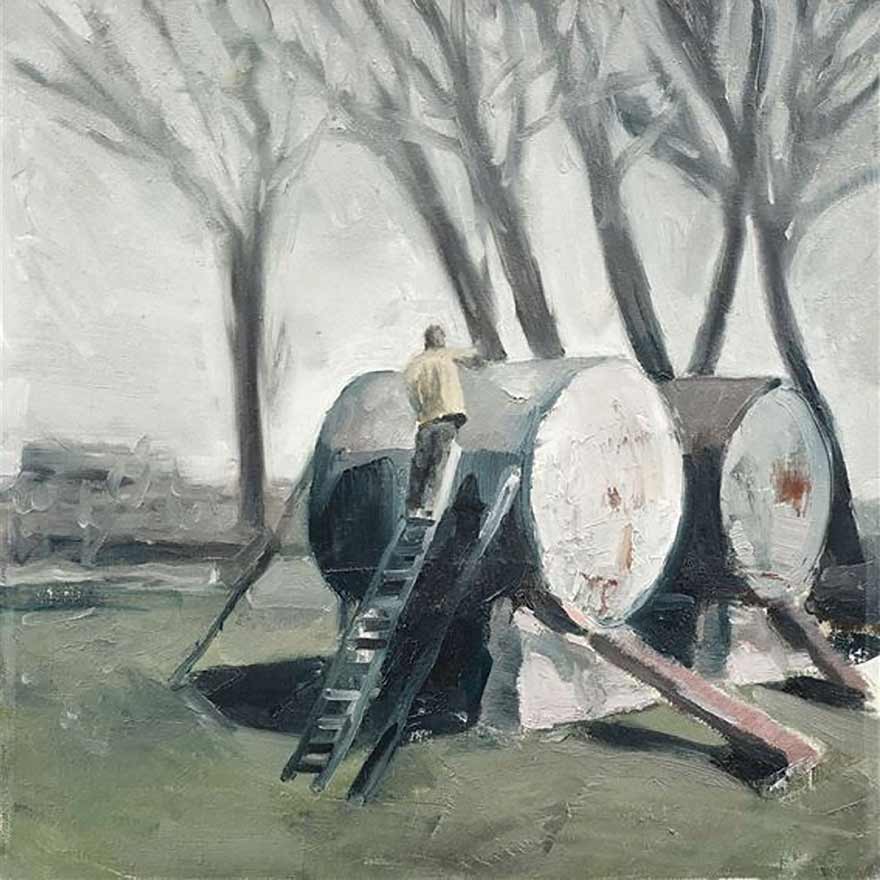 Is the world really this disquieting? Comca may have alternative visions, but his work consistently refuses to find serenity and solace in the places most would expect to find them.

Romanian international prominence is rapidly on the rise, but perhaps it’s more instructive to view the roots of Romania’s contemporary renaissance as a further addition to a global body of the artistic response to unprecedented political and social transition

Born in 1981, Oana Farcas is one of a newer generation of Romanian artists associated with Cluj, where she began her studies in 1999.

Farcas describes her work as “my own private collection of bits and pieces of recycled memories and visual information”. 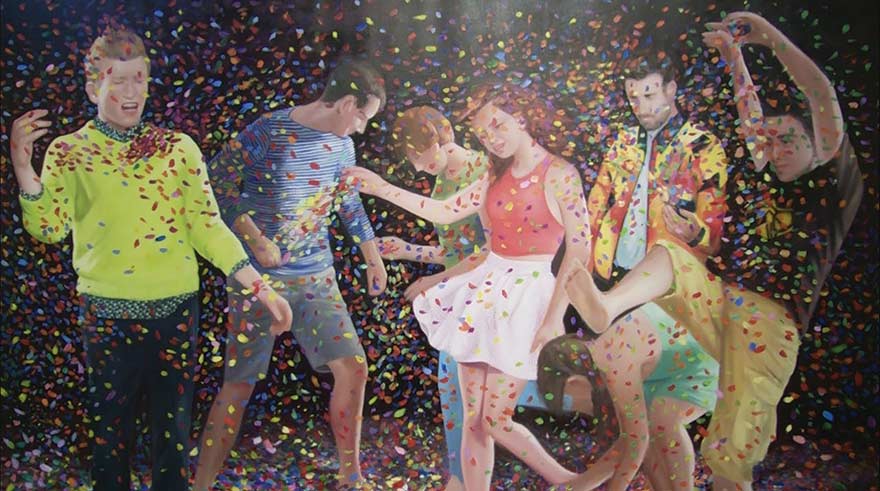 While this approach to art-making has become increasingly, even predictably, routine, Farcas consolidates this sense of an “imaginary museum” by frequently producing miniature works alongside larger pieces.

Born in 1978, and educated in Cluj-Napoca from 1996-2001, Serban Savu is one of the better-known representatives of recent Romanian art, as well as arguably among the most talented. 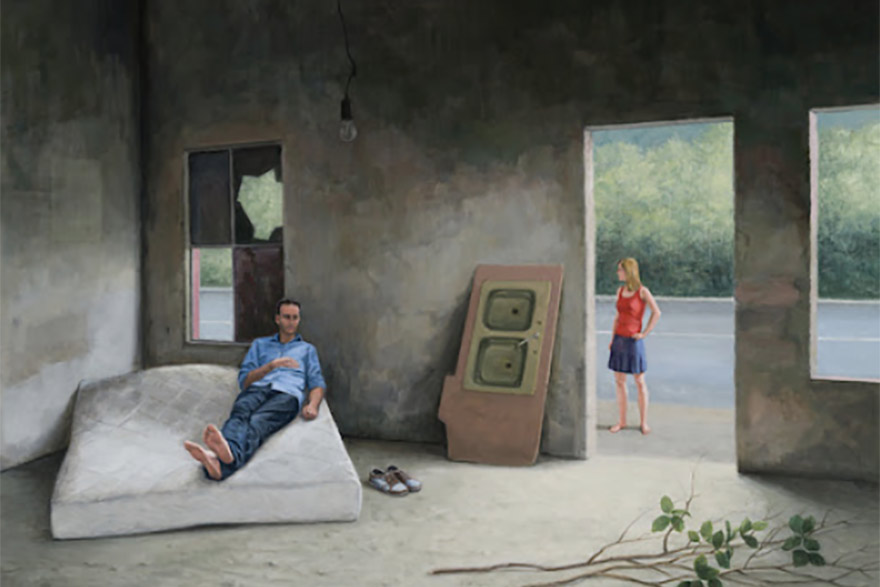 Yet despite the dreariness of the locations in which he chooses to place his figures, Savu’s subjects seem unoppressed by their surroundings, sunbathing, swimming, working, walking…

Nevertheless, Savu’s impressive figuration blinds us to various manipulations. His technique of isolating figures within wide expanses of land or cityscape creates dramatic compositions powerfully at odds with the mundanity of his subject matter. In a continual elision of past and present, he transforms all manifestations of the utilitarian and ordinary into moments that surpass the sum of their parts.