A city can be shaped by many...
Read more

Of all the instruments in the world, violins and...
Read more

Office Design Trends And Ideas For 2022

Amid the pandemic, the world of office...
Read more

Innovative, vibrant and thriving are the words that could describe Mexican art. From pre-Columbian times through today, the art of Mexico makes quite an impression on those who view it. Mexican art history begins with early peoples, such as the Olmecs, Incans, Mayans and Aztecs. These early artists produced works during the 3,000 years between 1500 BC and 1500 AD

From the start of the Mexican Revolution in 1910 to the aftermath of World War II, artists and intellectuals in Mexico were at the centre of a great debate about their country’s destiny. During the 1910s, artists in Mexico possessed a spirit of cosmopolitanism and a sense of national belonging. Those who had studied in Europe brought innovative styles back to Mexico City.

For Mexican artists, modernism was not simply a matter of being in tune with international Postimpressionism, Art Nouveau, or Cubism. They were interested in creating an aesthetic with a distinctly Mexican character, or mexicanidad, based on national history, traditions, and identity.

The mid-1930s saw a renewal of combative populist and political art. International events continued to affect the Mexican art world at the end of the decade, as the Spanish Civil War and World War II brought a wave of exiled European artists to Mexico. In the years after World War II, Mexican modernism had a dual legacy. The tradition of political art persisted in the work of figures such as David Alfaro Siqueiros. This coexisted with painting in a more poetic and universalized manner and in tune with international trends in abstract art.

It could be freely said that Mexico has the most recognized art scene of all other Latin American countries. There are several reasons for that, the most significant one being the important names in contemporary art coming from Mexico (let us just mention Frida Kahlo or Diego Rivera). Although being under the heavy influence of the major European movements, Mexicans did create unique and recognizable styles, such as Mexican Muralism or The Rupture Movement. Finally, Mexican art did remain heavily European in style, but indigenous themes appeared in major works as liberal Mexico sought to distinguish itself from its Spanish colonial past.

Today, Mexico City is a thriving hotbed of artistic talent, with big names like Frida Kahlo having lived and worked there and rising talents like Sofía Castellanos calling it home. As far as contemporary art goes, there are plenty of splendid examples to choose from, but here are the ten contemporary Mexican artists that we think you need to know about.

Perhaps the most iconic Mexican artist, the incomparable Frida Kahlo has to be our first mention. With a back catalogue of almost 150 surviving pieces of art, the majority of which are self-portraits that predominantly hone in on her complex and often tragic life, as well as a cult pop culture reputation, Frida Kahlo is a formidable figure of the Mexican art scene. The house which bore witness to her birth, life and death are now the wildly popular and much-frequented museum better known as La Casa Azul.

Two-time Frida’s husband, Diego Rivera, can’t go without mention either. This prominent Mexican muralist is so iconic that he even features (as does Frida) on the MXN$500 banknote. His prolific body of work is still to this day on display in both the US and Mexico (amongst other countries) and many of his murals can be seen for free in Mexico City at the Palacio Nacional and the Secretaría de Educación Publica.

Known as Britain’s lost surrealist, Women’s Lib champion Leonora Carrington was a rebellious Lancashire-born artist who despite being little known in her native UK was an impressive figure on the Mexican art scene. One of the last surviving (and one of the most prolific) contributors to Mexican surrealism before her death in 2011, her artwork was often revolutionary in its exploration of female sexuality. One of her murals can be seen at the Museo Nacional de Antropología in Mexico City.

Allegedly the most complex of the Mexican Muralists, José Clemente Orozco was one of the founding fathers of the movement and heavily influenced by political issues, a theme which is notable throughout his repertoire of murals. Whilst his pieces are spread right across both Mexico, from Jalisco to Michoacán, and the world, from California to NYC, his most famed pieces can be found in the Palacio del Gobierno in Guadalajara and the Hospicio Cabañas.

If you’ve visited the impressive, enormous Ciudad Universitaria at one point or another you’ll have more than likely been witness to some of David Alfaro Siqueiros’ work. Along with the aforementioned Rivera and Orozco, he was the third of ‘the big three figures’ in the Mexican Muralism movement and known for his social realist, fresco pieces, including the massive Del porfirismo a la Revolución mural in Chapultepec Castle, Mexico City. Influenced first by cubism, and intensely interested in revolutionary subject matter, Siqueiros’ work is also best summed up as political.

Mexican sculptor Sebastián goes by just one name. Despite his reputation you’ve probably never heard of him, although you will almost certainly have been witness to one of his many sculptures. Situated in various urban locations all over the world, including his native Mexico, Japan, Buenos Aires and Havana, these massive, predominantly steel or concrete and often geometric sculptures are considered unique to both Mexico and Latin America. Easily his most famous piece is Mexico City’s Caballito. 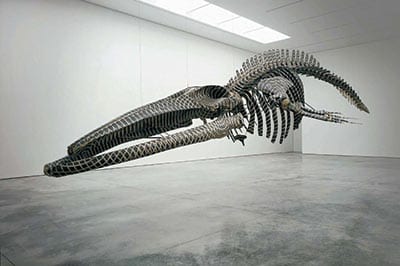 Gabriel Orozco may not be a relation of the aforementioned José Clemente Orozco but he’s an equally iconic, albeit more recent, Mexican artist. Having dabbled in photography, painting, drawing and sculpture in equal measure, you might be forgiven for thinking he’s merely a Jack of all trades, yet you couldn’t be further from the truth. Often referred to as one of this decade’s most influential artists, you can catch his work at the excellent kurimanzutto gallery in Mexico City. 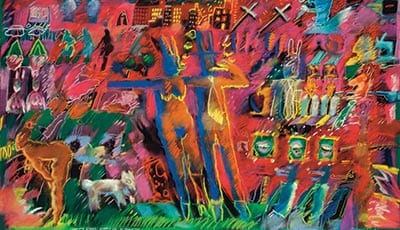 Carlos Almaraz’s street art, in particular, propelled him to the position of one of the Chicano Art Movement’s leading figures. Having moved to the U.S. at a young age, Almaraz had become increasingly aware of and interested in this multicultural atmosphere and ultimately died as one of the most prominent artists on the scene which aimed to create a separate artistic identity for Chicano’s in the U.S. His work is explosively colourful and was often political. 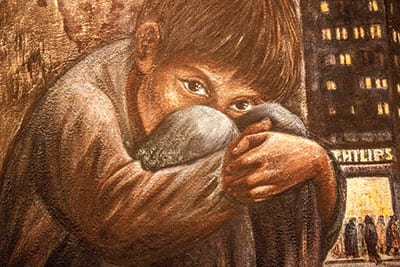 Polish-born Fanny Rabel was a trailblazing figure in Mexican art and even found her way onto the booming muralism scene in the mid-twentieth century. In fact, many consider her to be the first modern female muralist, and certainly one of the youngest. Either way, she was definitely the only female under the artistic tutelage of her close friend (maybe you’ve heard of her?) Frida Kahlo and worked with both of the muralist big-hitters, Rivera and Siqueiros during her career. Her mural Ronda en el tiempo can be seen at Mexico’s National Anthropology Museum.

With a museum and who knows how many streets named after him across Mexico, Rufino Tamayo was an Oaxacan painter who despite also being influenced by the dominant surrealism themes of the day, rejected the political tendencies of his contemporaries. Instead, his works focussed on depicting traditional Mexico through limited but bold colour palettes. He is equally as memorable for his contributions to graphic arts though; he experimented with woodcuts, etchings and Mixografia amongst other techniques.

Last year marked three decades since the signing of the North American Free Trade Agreement (NAFTA), which – observed on the basis of the...
Read more

Embassy of Mexico in Serbia hosted a recepetion marking the 212th anniversary of Mexico's independence. Ambassador of Mexico and host of the event H.E. Carlos...
Read more

Mexico questioned the use of elements from the Mayan indigenous culture by Chinese fashion company Shein. It was stated that Mayan elements were used in...
Read more