From Roman times to the present day, Italy has played a large role in the international art market. The Biennale dell’Arte di Venezia, or the Venice Biennale, was the first international art exhibition to promote Contemporary Art. Founded in 1895, the fair takes place every two years

In addition to the Biennale, various other institutions and foundations focused on Contemporary Art have emerged in Italy over the past few years. From national or regional museums to private collections of famous and well–known personalities, Italy is renewing its image, and focusing more on Contemporary Art. A country with such incredibly rich art history, Italy has boasted prominent names that have influenced generations of artists since ancient times.

Famous Italian artists working today retain this iconic skill and innate artistic passion while utilizing their medium in innovative and unique ways. Additionally, the country has become the home of a thriving group of street artists who have managed to bring their country’s street art scene up to the level of those found in America, Great Britain, and France. Today they are internationally renowned for their work and are painting and exhibiting it all around the world.

Marco Burresi Zed1 has been active on the Urban Art scene for more than two decades. Widely recognized for his surreal murals of awkwardly looking plump-face figures and mesmerizing bizarre imagery, Zed1 creates artwork which very often conveys humorous and dark messages of social and political commentary. Apart from being strong evidence of his wondrous drawing skills, Buressi’s captivating art found on walls and canvases all around the world, show artist’s masterful choice of colours.

Combining photography, drawing, sculpture, and installation, Loris Cecchini forms a unified poetics, the cardinal element of which is transfiguration. All these different elements in his work interrelate in a constant process of deconstruction and reconstruction. Having a curious nature and intrigued by the correlation between art and life, he explores the results of many different styles and sciences.

Working with video, sculpture, installation, painting and drawing, Roberto Cuoghi explores the diversity of form and appearance. His practice constantly engages the concept of metamorphosis and change of identities. One of his early works involved his body going through a metamorphic process to become his own father, pushing the physical capacities to the maximum.

The artistic attitude of Vesod has been greatly influenced by his father, the Italian surrealist painter Dovilio Brero. Born in Turin in 1981, he started developing his interest in the graffiti since the early 1990s. Over the years, while pursuing academic education, he developed a personal visual language which drew inspiration from both Renaissance and Futurism. Using nothing more than cans of spray-paint, Vesod produces intense and masterful images of high contrast and staggered motion, which blur the borders between fine and street art.

MONEYLESS – GEOMETRY AS THE FOUNDATION OF NATURE

Teo Pirisi, also known as Moneyless, got involved in the street art movement during the 1990s as a member of the Tuscany graffiti scene. During his studies at the “Accademia delle Belle Arti” of Carrara he developed his unique signature geometric style which seems to quote a Platonic vision of geometry as the foundation of all nature. Coming from the graffiti background, Moneyless experimented with the letterforms, gradually simplifying them to basic lines and geometrical patterns.

Filippo Minelli was initially engaged in street art, developing his own unique style based on the aesthetics of protest. He brought politics to a new level bay decontextualizing the use of tear gas, reversing the function of flags, and borrowing from the aesthetics of protest slogans. In 2007, Minelli started his ongoing project entitled Contradictions, a land art project where he wrote the names of social networks and corporations on the walls of slums in developing countries pointing out the gap between the reality we live in and the ephemeral world of technologies. Beginning in 2009, his ongoing photographic series Silence/Shapes portrays smoke bombs in romantic landscapes, juxtaposing the beauty of nature with the violence and chaos in political demonstrations. 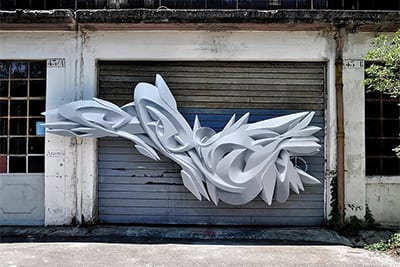 Manuel Di Rita (Peeta) is an Italian graffiti artist, painter and sculptor who is internationally famed for his mind-boggling three-dimensional graffiti which appear to be flowing above the painted surface. Member of several renowned international graffiti crews (FX, RWK and EAD), a true master of shading techniques through the use of gentle gradients of colour, Peeta creates spectacular artworks which give the illusion that light is hitting them from different sides at the same time. Using careful perspective, his perfectly shaped, spraypainted graffiti of formidable visual depth appear as sensational hovering sculptures of vertiginous and shiny shapes that seem to twist and wind in front of the wall.

An Italian contemporary artist and designer, Gianluca Traina is best known for his projects PORTRAIT 360. Mostly concentrated on sculpture and painting, he employs different media and materials such as paper and PVC. Fusing art, fashion and design, his works strive towards the connection between the art object and the viewer. His famous project PORTRAIT 360 is a series of portraits where he incorporated two-dimensional images with three-dimensional elements.

Sten & Lex is an Italian street art duo, internationally acclaimed for their stencils they have been doing together since 2000. Sten (Rome, 1982) and Lex (Taranto, 1982) are considered to be pioneers of urban stencils in their country, who utilize unique halftone stencil technique combining collage, stencil and optical illusion, the style they have developed to perfection. Today they produce gigantic portraits of mainly anonymous people, made from their own photographs and consisting of thousands upon thousands paper strips.

Blu is an extraordinary muralist from Bologna who has been involved in the Italian street art scene since the late 1990s. All this time he has been very successful in concealing his true identity, which is pretty fascinating given the sheer size of his easily recognizable public artworks. His most famous artwork is a seven-minute silent animated mural called Muto which is composed of hundreds of wall paintings.

Agostino Iacurci is remarkably prolific Italian street artist, recognized for his monumental, multi-layered and brightly coloured murals of synthetic forms and flat shapes. Always considering the architecture and context of the environment he works in, Iacurci creates seemingly simple and very accessible artworks. His signature narrative-like style paintings can be found on walls both small and large all around the world, including some of the more exotic locations such as the skyscraper in Taiwan, the school in Western Sahara and inside the maximum security prison near Rome.

Pixel Pancho is a highly talented street artist from Turin and one of the most outstanding protagonists of the Italian urban art scene, who specializes in large-scale murals. He is considered to be one of the most prominent creatives in his field. This graduate of fine art studies has been creating original street artwork, reminiscent of Michelangelo’s classic compositions, since 2001, steadily gaining a large following. Pixel Pancho uses a wide variety of mediums to create mesmerizing paintings of a 1950’s futuristic fantasy world.